One way streets are anti-cycling 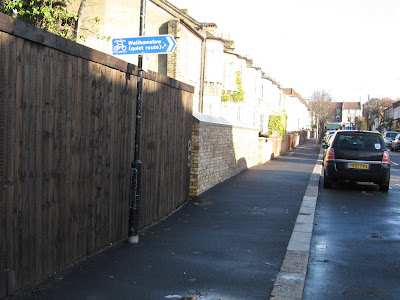 This 'Walthamstow - quiet route' for cyclists sign on Albert Road E17 (above) directs cyclists between the NO ENTRY signs on Connaught Road E17 (below), recently made one-way, with no contraflow lane. 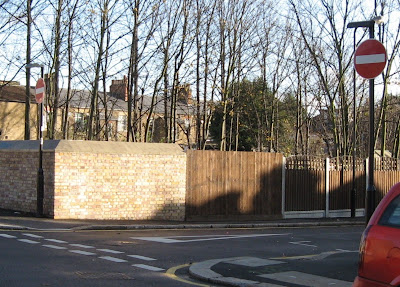 As we know from the mass media, ‘rogue cyclists’ jump red lights, ride on the pavement and cycle down one-way streets the wrong way. As this sign encourages them to do!

In reality a large number of cyclists simply adapt to a road system designed to manage motor traffic flow and to accommodate and protect reckless and lawless drivers by disobeying the rules of that cycling-unfriendly road system. The only issue that should concern cycling campaigners is whether or not this behaviour impacts on other vulnerable road users such as pedestrians, and whether or not it puts cyclists at risk.

One way streets are proliferating in London, and the only reason is to accommodate on-street parking. A one-way street is a symptom of a capital city still in thrall to the supremacy of cars. London continues to go backwards, not forwards, and promoting car dependency through on-street car parking and yet more one-way streets is a sure way of suppressing cycling growth.

In the archives of Hammersmith and Fulham cycling group there’s an interesting moment in the usual dreary discussion of ‘rogue cyclists’:

Q: [QWEN] I see one way streets as a cause of people cycling on the pavement. Why can we not get rid of them?

Graeme Swinburne [Shared post, Royal Borough of Kensington & Chelsea Director of Transportation and Highways, London Borough of Hammersmith and Fulham Assistant Director of Highways]: They were often put in to increase the amount of parking spaces available. With a one way street you can have parking on both sides. In RBK&C the number of applications for parking permits is way over the number of spaces available and we would not be able to take out many spaces.

Graeme Swinburne is a very typical London transport planner. His planning vision is centered on the smooth management of motor vehicle flow, which must not be inconvenienced and which must come before cycling and walking, and accommodating, not suppressing, a growing demand for on-street car parking.

Car owners are put at the centre of the transport universe by politicians and planners alike, and drivers naturally become incapable of seeing how the entire traffic network is designed to prioritise and manage their own fossil fuel addiction. They wax indignant at the rule-breaking of cyclists, which provides an essentially benign challenge to their own complacent, selfish, self-serving, car-centric perspective on life.

When I cycled along Grange Park Road in Leyton recently I wasn't at all surprised to discover that the sign directing cyclists to George Mitchell School, past the NO ENTRY signs on Park Road (which I've blogged about before), was still there. It's yet another example of how the car-crazy transport planners of Waltham Forest introduce one-way streets without the slightest consideration of the impact this has on cyclists, or even on recommended cycle routes. And it's another way in which cycling growth is being suppressed in order to accommodate on-street car parking and motor vehicle traffic flow.

The original target for children cycling to school was 5 per cent at each school where cycle stands were provided. This has not been achieved even after cycle training was provided.

Only 10 children are listed as cycling to George Mitchell School.

Which is hardly surprising, since local streets are designed not for safe, convenient cycling but to prioritise car parking and car use.

(Below) Sending cyclists on a collision course with oncoming drivers, down a one-way NO ENTRY street choked with parked cars on both sides and with no contraflow lane. 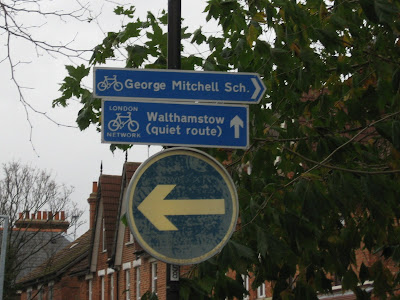 Posted by freewheeler at 10:01