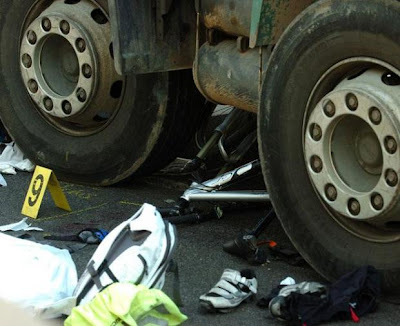 I once had an illuminating cup of tea with a traffic officer from the Metropolitan police whose job it is to scoop cyclists from the road after accidents – and he had one key piece of advice.

Don't worry about wearing a helmet or a fluorescent sash, he said, just never, ever, go up on the left-hand side of lorries.

That, he explained, is how the majority of cyclists have been killed in London over the past few years.

That assumes, of course, that cyclists who are killed by left-turning lorry drivers are at fault. But that is only true if the cyclist has wilfully undertaken a stationary lorry which is indicating left.

Bill Chidley has also been chatting to a policeman:

I was talking to a senior collision investigator at the Met, and he said that the problem is that loads of people see the aftermath; but to determine whether the cyclist or the lorry driver were at fault (or both) one needs to know what happened before the collision. He said there are rarely credible witnesses to what happened before.

Exactly. If the cyclist was waiting at the junction and the lorry driver pulled alongside and then turned left, then the lorry driver was at fault. The problem is that in the absence of other witnesses, the only person to offer a witness statement is the killer driver. Because the road lobby has successfully resisted the introduction of black boxes, there is no record of how a lorry driver has been driving prior to a fatal collision. If there is no witness to say that a lorry driver came up from the rear of a cyclist, then pulled alongside or overtook and turned left, then the negligent killer driver is most unlikely to be charged by the Crown Prosecution Service.

And that seems to be the problem with a number of cases where an apparently experienced commuter cyclist – usually a woman - has ended up under the wheels of a lorry. No witnesses to the relative positions of the cyclist and lorry in those key sixty seconds prior to the collision.
Posted by freewheeler at 12:17