‘The majority of cyclists do not ride through red lights’ 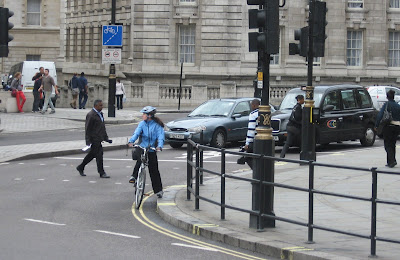 For those of you who like statistics, Transport for London has done some research into London cyclists and red light jumping. Among the wealth of research findings, these are the ones that stand out:

The research is flawed by two omissions. Firstly, it fails to study red light jumping in relation to the existence or not of green phases for pedestrians. Jumping the lights at red is more inviting if motor traffic is stationary, held at a red phase, and it then becomes safe for a cyclist to cross. This may of course impact on pedestrians to their detriment; however, if no pedestrians are crossing, there is no logical reason why a cyclist should not cross at red. In this regard cyclists are no different to pedestrians: they cross roads at red when hanging around waiting seems entirely pointless. For a cyclist red-light jumping may also be safer in relation to road layout ahead, especially if you need to get into the middle of the road to turn right from a two-lane-same-direction carriageway.

Secondly, it fails to relate red light jumping to whether or not there is an Advanced Stop Line which is occupied by a motor vehicle or vehicles, in which case red light jumping may be a survival strategy on the part of the cyclist. I am certainly not going to remain in an ASL at red if a motor vehicle pulls in alongside me. The Metropolitan Police has a policy of not enforcing ASLs and it is therefore blatantly discriminatory of them to enforce road traffic law selectively. No cyclist should be prosecuted either for going beyond the final white line or for jumping a red light when vehicles have entered the ASL at red.

These omissions rather undermine the report’s introduction of ethics into the analysis:

1 in 6 of cyclists do jump a red light, and at this level may encourage more to do so in the future

Enforcement of Advanced Stop Lines might well discourage some red light jumping by cyclists. But Transport for London is a car supremacist organisation, so this consideration is naturally excluded from the analysis. The ASL legislation is itself blatantly rigged in favour of poor driving, because it permits drivers to halt there unless the box is empty when the light is at red. But no cautious, careful driver should ever find themselves in an ASL when the lights change. The orange phase is intended to signal to drivers to slow down, when in reality most accelerate.

The TfL study also excludes from analysis the reality that red lights are there to manage motor traffic, not cyclists. On the one hand cyclists are expected to obey car laws; on the other hand they are expected to tolerate and not respond to massive abuse of Advanced Stop Lines by drivers.

And now the Met is cracking down:

PC Nigel Lewis read out the results of the morning's work. "10 people were stopped and spoken to about contravening the red light and three people were given a fixed penalty."

"Some people didn't realise they had to stop on a white line, at the red light.

Just like that criminal cyclist in the photo above. She should be in the Advanced Stop Line, along with the taxi and the car!

Meanwhile Westminster councillor Angela Harvey, who wants council staff to have the power to fine cyclists, says “I’m a cyclist” but, curiously, refers to a naughty cyclist “who then drives off into the distance”. A Freudian slip by someone who is really more of a motorist than a cyclist, Angela? See the BBC TV interview, which contains the bizarre claim that ‘if a car jumps a red light they get done for it’, here.

How comforting to know that the London Cycling Campaign is backing the crackdown:

Tom Bogdanowicz, of the London Cycling Campaign, gave conditional support to the plan to help reduce the “unacceptably high number of deaths on our roads”.

Leaving aside the very debatable question of guilt and responsibility regarding cycling fatalities, and the reality that red light jumping, pavement cycling and one-way street 'wrong way' cycling are all a response to a transport infrastructure that is car-centric, hazardous and inconvenient for cycling, I would have thought pragmatically that if Westminster Council really does get the power to issue naughty cyclists with £100 fines (more than the fine for steering a ton of metal while chatting on a mobile phone), all that will happen is that some of those fined cyclists will stop cycling. I find it odd that the LCC is giving its support to a measure which is being put forward by a local authority which is notoriously anti-cycling and anti-walking, which is just another symptom of the cyclophobia being stoked by some sections of the mass media, and which will surely only have the effect of suppressing cycling.

You can tell he never rides a bicycle.

(Below) Another shocking example of a criminal cyclist beyond the white line, approaching Trafalgar Square from The Mall. 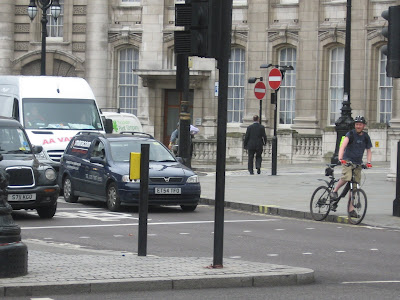