Parking of bicycles and cars at Blackhorse Road Station 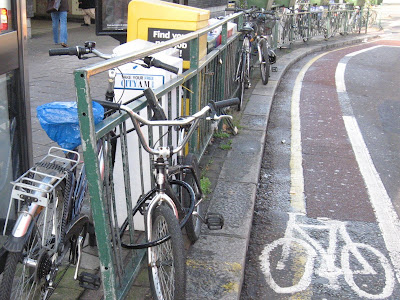 Blackhorse Road station, Walthamstow, is both an overground station on the Gospel Oak to Barking line and an underground station, the penultimate stop on the northbound Victoria Line. The station opened in 1894 and the tube station in 1968.

The station has parking for 12 bicycles and 350 cars.

The cycle parking is in the form of 12 Sekurabyk stands. These are weird contraptions which resemble medieval instruments of torture, and require clamping the bike through the spokes of the wheel to a metal clasp, which is then locked. At least, I think that’s how they work. Several are broken and few cyclists seem to like using them. The vast majority of cyclists parking here prefer to use the railings outside the station.

In 2005 the council employed consultants “to find out where users of the car park were coming from and the patterns of usage throughout the AM peak period (6.00am to 9.00am)”.

Results showed that 48% of users had started their journey in Waltham Forest and a total of 58% had come from within Greater London. The remaining 42% had come from outside London, with 26% coming from Essex and 8% from Hertfordshire.

In other words, car dependency is being catered for at this station to a remarkable degree, encouraging unnecessary car journeys, promoting the use of local streets by out of town vehicular traffic which contributes nothing to the area apart from noise and pollution, while discouraging, and discriminating against, cycling and cyclists.

This discrimination extends to pedestrians, since at the junction outside this station

Caged pedestrian refuges allow pedestrians to cross the roads in two independent stages. This allows the junction to operate without an all red phase.

The first verb in that first sentence is wrong: substitute ‘force’ for ‘allow’ and substitute for ‘independent’ the words ‘lengthy and inconvenient’. At the end of the second sentence, after ‘red phase’, add ‘so as not to unduly delay drivers by treating pedestrians as equal road users’.

If you want to know why British transport culture is sick and rotten to its toxic car supremacist core, you need look no further than here. Cycling and walking are treated as third-class transport modes; the car user is the number one priority.

On major approach roads to this station (i.e. Forest Road, Blackhorse Lane and Billet Road) it would be perfectly possible to re-allocate road space for segregated cycle lanes on the Dutch model. With an infrastructure in place you could then shut down this car park, which serves no function other than unnecessary car dependency. The carrot and stick approach. But there is no vision of such a future (least of all on the part of cycling campaigners) and no political will to implement such a vision. Instead it's business as usual, which predictably will result in greater car ownership and use, and the throttling of a potential mass cycling future. 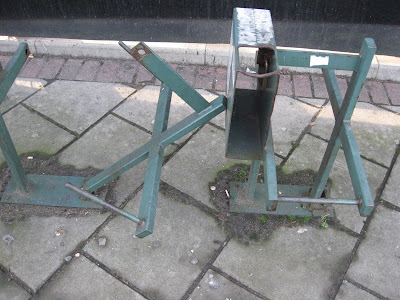 (Below) The deeply unpopular Sekurabyk stands 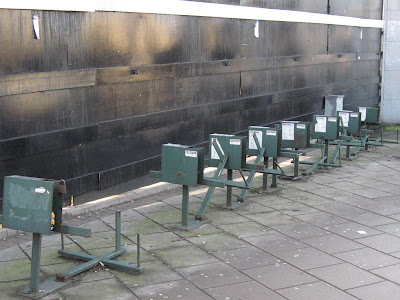 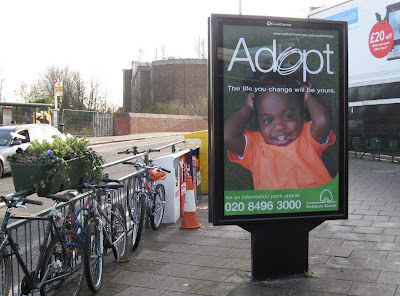