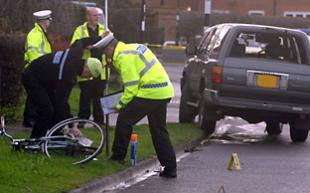 We can promote cycling without worrying that this will lead to more casualties.

The latest fatality in York will no doubt be coolly disregarded by the ideologues who run the Cyclists' Touring Club. It’s statistically insignificant and they know best.

I would argue that if you base your concept of cycling safety on measuring official road casualty statistics against cycle counts of commuter cycling, you arrive at bogus conclusions about how incredibly safe cycling is. This not only ignores the reality of the growing exposure to risk which cyclists face in a mass motoring society where lawless and reckless driving is at very high levels (are we supposed to believe that drivers in York scrupulously obey speed limits and don’t drive while using mobile phones?) but also ignores an individual’s subjective perception of danger. They appear to be very high in York, if these comments are anything to go by:

THE headlines regarding a cyclist’s death (The Press, December 7) illustrate starkly how dangerous it remains to be a cyclist in York.

My regular trips into York can still fill me with a nervous disquiet because of the total disregard some motorists show towards the two-wheeled fraternity. It seems almost a game to some drivers to cut up or drive too close to cyclists.

RAWCLIFFE Lane and Eastholme Drive are supposed to be on “recommended safe cycling routes” according to my cycle map of York published by City of York Council.

The fatal accident there on Saturday is by far not the first such incident between a cyclist (lulled into a false sense of security by such recommendation?) and a car (many of whose drivers use the route as a rat-run, as do drivers of HGV lorries on this stretch of road.

And if you can be bothered to scroll down here to the comment made on Sat 5 Dec, 9:03 pm:

To motorists we cyclists are a pain on the road, i have at least 3 encounters with cars vans etc, on a 3 hour ride most days. I sometimes think this is going to be my last ride on our roads here in York because of the maniac drivers.

York is touted as a cycling paradise, yet

City of York councillor Joe Watt, who represents the Skelton, Rawcliffe and Clifton Without ward, said: “It is a tragedy for the community. It is very saddening. It causes me considerable concern and I think one of the lessons for cyclists is that they have to cycle defensively and be visible. Wearing a helmet can also make the difference.”

‘be visible’? This fatal collision occurred at 10. 25 am on a Saturday morning, for God’s sake.

An inquest into the death of York cyclist Derek Duffill has been opened and adjourned.

The 67-year-old died on Saturday after colliding with a car on the mini roundabout between Rawcliffe Lane, Green Lane and Eastholme Drive in Rawcliffe.

Calling the vehicle involved ‘a car’ is a bit misleading.

Press coverage of the death of York cyclist, Ruby Milnes, is rather more than a spoiler for news of the successful bid for money and status for cycling in York. The tragic and aviodable death of one of York´s promising young citizens on a supposedly safe cycle path is an utter shame. It would have cost very little to ensure her safety ...and that of the hundreds of other users of that path. Ruby died because of the failure of CYC [City of York Council] to manage and administer safety on an existing cycle path. If safety cannot be assured on our existing cycle paths, what is the point of expanding the network?

cycling on the Sustrans Selby to York cycle path when she was involved in the accident with the Shepherd lorry, thought to have been delivering to the racecourse.

SIXTEEN months after teenage cyclist Ruby Milnes was killed by a lorry on a York cycle path, prosecutors have still not decided whether to take any action.

Given the record of the Crown Prosecution Service, that’s not exactly a surprise.
Posted by freewheeler at 10:02