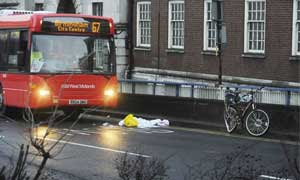 A CYCLIST died after being trapped under a bendy-bus in a crash in Birmingham today. [Wednesday 9 December]

The cyclist, believed to be a postman, was riding through the city when he was involved in the collision with the bus at the junction of Lancaster Circus and James Watt Queensway at 6.10am.


The Comments that interest me are these:

With regards to cycle lanes, I am having to to cycle on the main carriageway along the Bristol Road between the City Centre and Priory Road even though there is a cycle lane because the cycle lane is plastered with broken glass and I am fed up of getting punctures. I have phoned Birmingham City Council numerous times during the last month but nothing has been done

A bus driver has been arrested on suspicion of causing death by careless driving after a cyclist died.

John Ariss, 63, a Royal Mail employee, was cycling home from work when he collided with a bus at James Watt Queensway, Birmingham, police said.

Judging by the photograph he didn't collide with the bus, the bus collided with him - hence the buckled back wheel. And note the lethal environment - a wall with railings, the classic death trap environment for cyclists. Yet these kinds of railings can still be found at major junctions in all British cities, including London.
Posted by freewheeler at 10:03