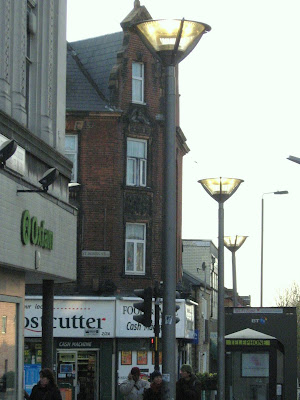 Labour Councillor Liaquat Ali has been spotted a short distance from Walthamstow High Street, which he represents. He has a lot in common with the two Liberal Democrat councillors who also represent High Street.

I’m sure if you asked them, all three councillors would be passionately supportive of the Council’s SWITCH IT OFF publicity campaign, urging residents not to waste electricity in their homes. Which makes it all the odder that not a single Waltham Forest councillor seems to notice the street lamps which blaze all day long all over the borough. Yesterday in Walthamstow High Street I counted no less than eight street lights blazing in the sunshine in the early afternoon – two outside Sainsbury’s, three more down by The Cock pub, and three more (shown above) down at the St James Street end, outside Oxfam.
Posted by freewheeler at 09:28