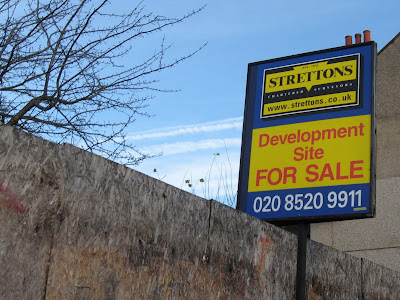 My photograph shows green space alongside Forest Road, once owned by the people of the London Borough of Waltham Forest. The Council decided to give this land away to a housing association. That decision was made with the full approval of the Tories, Lib Dems and Labour councillors on the planning committee. The housing association involved subsequently decided not to build on the land but to sell it. The people of this borough have thus not only lost green space land, they have also gained absolutely nothing from its disposal. But then the dealings of this crap council and land disposal are very odd, are they not? (QV the notorious Arcade site).
Posted by freewheeler at 09:08