On 9 July I blogged about a wrecked bike which had been abandoned for weeks in the cycle stands by the Arcade site. Someone had evidently nicked the front wheel, at which point the bike’s owner lost interest in her machine.

Bless my soul if the Council wasn’t down there the very next day with a notice requiring the removal of said bicycle within seven days, or else. So somebody out there IS reading my blog! 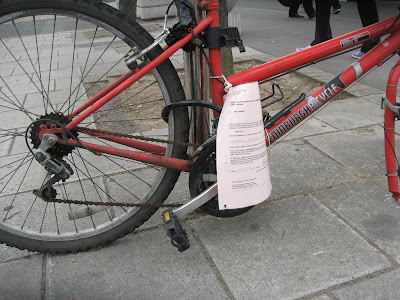 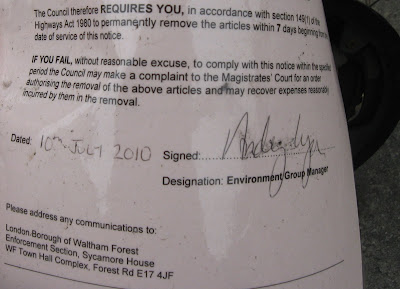 I don’t expect the luckless owner of the bike ever went back to look at it. Maybe she packed in cycling altogether. UK research shows that, 17% of cyclists experience bicycle theft. Of these, 24% stop cycling and 66% cycle less often (DTR/TRL 1996)

As you might expect from Waltham Forest Council, since then nothing at all has happened. Nothing at all. Nuffink. Zilch. Rien.

But is it really the case that a council has to apply to a magistrate’s court to remove an obviously abandoned bike from a stand? I would have thought it possessed the powers to remove unauthorised and obstructive street materiel without going through such a cumbersome procedure.

Cycling campaigners are always fretting about the image of cycling. Me, I think prolonged scenes like this send out a very clear message that cycling today is a neglected wreck.

Incidentally the motorbike which is shown locked to the bike stand in my original blog post continues to be parked here (it was there yesterday, for example) even though the parking attendants should be giving it a ticket for footway parking. 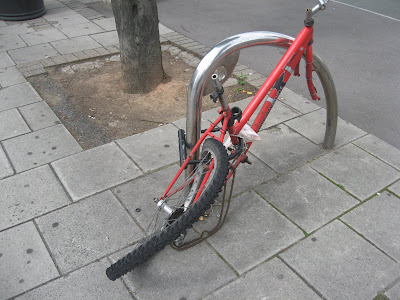