It’s an old story that never goes away:

Streets across the country are being ‘disfigured’ by tens of thousands of unnecessary road signs, bollards, posts and railings, a campaign dossier revealed last night.

• Guard rails used to protect pedestrians ‘can cause accidents or increase the risks to people - such as where cyclists get caught between them and large vehicles'.
• Bollards are used to stop cars parking on pavements when lifting the height of the kerb would achieve the same thing without the clutter.

In cycling-friendly Redbridge I came across this marvellous example of ‘shared use’ on the Southend Road (A1400). Simply stick up a sign allowing cyclists to ride on the pavement and watch as they develop their skills in avoiding both bipeds and traffic sign poles. Disappointingly, I didn’t encounter any pedestrians or cyclists on this marvellous piece of infrastructure. Why, it’s almost as if normal people prefer to use cars rather than walk or cycle! 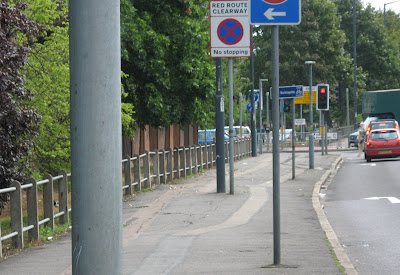 Posted by freewheeler at 08:23