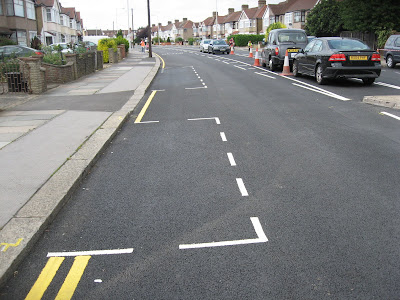 The London Borough of Redbridge, like its neighbour Waltham Forest, is an Outer London borough. Cycling’s modal share in both these boroughs stands at one per cent. In Redbridge car travel’s modal share is 54% and in Waltham Forest 45%. On average the school run accounts for up to 20% of traffic on UK roads at peak morning times; in Redbridge the figure is 30%.

There is no disagreement among transport professionals about the car-sick condition of Outer London. This is a zone where there is massive use of the private car to make very short journeys (half of all car trips in Outer London are less than two miles in length) and where very, very few people cycle.

There are a number of barriers to persuading people to take up cycling, including lack of permeability (i.e. direct and convenient cycling routes), poor signing, inadequate or insecure cycle parking and bike theft, but the major reason is widely acknowledged:

The car is valued for its sense of safety compared to a bike, which can be associated with feelings of vulnerability. Being in an area where the car is the dominant mode also increases the fear of traffic and makes the environment for cycling less attractive. The qualitative research suggests that the dominance and convenience of car use in Outer London is a barrier not just to those considering cycling, but also to those already trying cycling.

That is taken from a major policy document Delivering the benefits of cycling in Outer London, which was published earlier this year under the imprimatur of all the major bodies involved in promoting cycling in London, including Transport for London, London Councils, Sustrans and the London Cycling Campaign.

It strikes me as a document which is very good at diagnosing the disease but totally ignorant about how to cure it, putting forward remedies which have failed in the past and will unquestionably fail again in the future.

In other words, the revolution will happen here. Only it won’t. Because when you look at what is on offer it amounts to the same tired old mix of initiatives. You can read the whole document here.

For example, consider the number one

Fear of traffic and feelings of vulnerability

What remedy is proposed? This one:

In other words, not infrastructure but the same old, tired policy of trying to persuade people to adjust to vehicular cycling. It won’t work. And all the organisations involved in this policy document are totally in denial about the way forward, because the ONLY way you are going to get a ‘cycling revolution’ in London is to develop the only cycling infrastructure in the world which is a proven success:

What the Dutch have done is quite amazing. They've been wildly successful even by comparison with second place, and second place is taken by a country with similar, though less well funded, policies. There is no example of a successful alternative route to mass cycling.

The problem with the initiatives set out in Delivering the benefits of cycling in Outer London is that they are so bland everyone can nod their heads in agreement while continuing to promote car dependency. Redbridge Council purports to be cycling-friendly but if you want to see its true face take a look at the conditions on Baron Gardens, Barkingside, IG6. I came across this road on the Redbridge Sky Ride (so the conditions shown in the photographs are relatively car free).

On this street every single house has off-street parking for at least two vehicles. Baron Gardens is a very wide street, four to five lanes wide, which could easily be converted to a cycling-friendly street on the Dutch model. Instead the ‘cycling-friendly’ council has re-allocated road space to car parking. Not only are there parking bays at the side of the road, parking bays have even been created down the middle.

This is car dependency gone mad. It also deters cycling, because it creates lengthy pinch points where cyclists are forced into conflict with vehicles approaching from the rear. The majority of people are simply not prepared to cycle on roads like this one.

And there you have it. Conditions for vehicular cycling in Outer London are actually getting worse, not better. Both Redbridge and Waltham Forest (with its Forest Road Corridor Scheme) are re-allocating road space for car parking while at the same time piously affirming their cycling-friendly credentials. 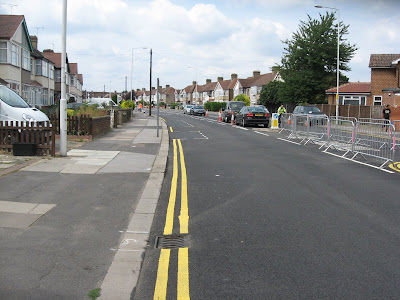 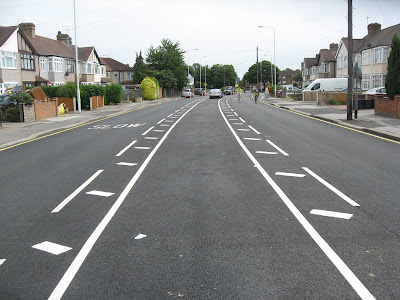 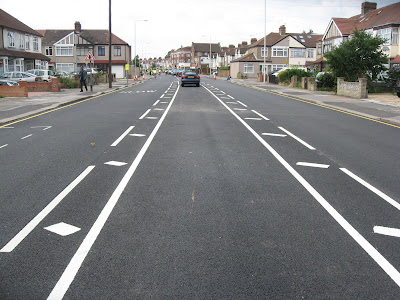 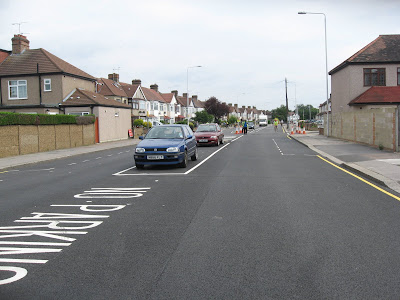 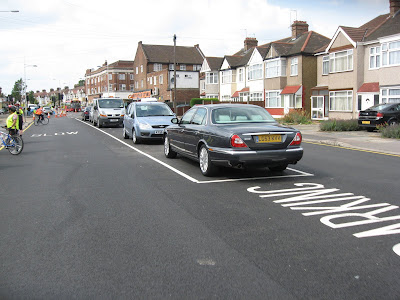 Posted by freewheeler at 12:20