‘Street rangers’ will crack down on central London ‘rogue cyclists’

Businesses have ordered their street “rangers” to stop rogue riders amid fears that the Mayor's bike hire scheme will increase problems in central London. People in Holborn and Bloomsbury are being encouraged to report bad cycling to the wardens

The initiative has been launched by “inmidtown”, a business organisation representing 550 firms between the West End and the City of London.

Inmidtown, which is funded by a levy on the business rates of its members, works with Transport for London and Camden council.

Last year 200 cyclists were stopped over four days during Operation Responsible Cycling. Business leaders fear the arrival of Boris bikes — there are seven docking stations, holding up to 176 bikes, in the area — will make matters worse.

Its “Considerate Cyclist Code” has 10 tips for better cycling, including:

* Don't cycle after drinking.
* Use back streets to avoid traffic.

This business organisation, which is a public-private partnership with Camden Council, is making up its own rules of cycling conduct and not based on recognised authorities. Not only is this organisation allowed to part-privatise public space, it is also creating its own private rules of conduct.

In effect, they are making up their own rules, enforcing them with the use of a private quasi-police force.

There is the usual, er, robust commentary on London Fixed-gear and Single-speed.

The rangers will not, of course, be cracking down on rogue drivers (a phrase which, curiously, no journalist ever uses). I was in this very area on Monday and snapped a few examples of rogue drivers who deliberately drove into Advanced Stop Lines at red. Funnily enough they were all drivers working for businesses. Could we please have a list of the 550 firms involved in this, so that we can check on their drivers and the amount of clutter they may put unlawfully across pavements? 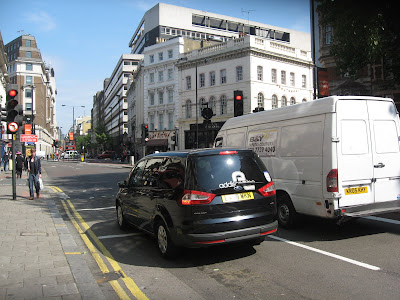 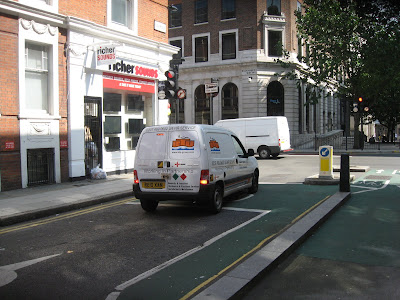 Posted by freewheeler at 09:31