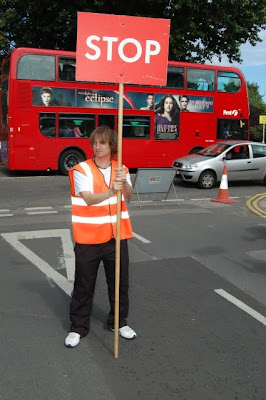 I tried hard to just treat it as a fun day out on the bike, but I’m afraid that I couldn’t help thinking just how little it all had to do with promoting cycling. Really, I know that sounds awful, but it wasn’t the sort of thing that’s going to persuade people to get out of their cars and ride their bikes next week when all the marshals have gone home and all the barriers have been taken down.

Worse, this kind of blog just brings out all the other whingers:

And I thought I was the only one curmudgeonly enough to resent the corralling, the frequent stops for the important people in cars and the absurd preponderance of highly questionable safety equipment.

Don’t forget the original idea of these days was a city completely closed to motor traffic. That was too much for London to swallow so for the Freewheel we got a few closed roads, and the stops were to allow pedestrians to cross. Now the Sky Ride is a segregated route mainly on back roads and in parks with minimum inconvenience to motor traffic. The message is: these are the safety measures we need to take so you can venture out for a ride to nowhere on your bicycle.
Posted by freewheeler at 09:39