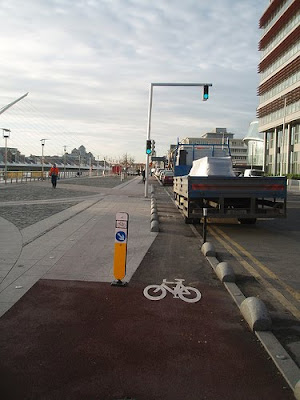 The theatre of the absurd. Dublin.


In his earlier years the writer Samuel Beckett was a keen cyclist, and bicycles figure prominently in his works. One of the key phrases of the novel Mercier and Camier states: "The bicycle is a great good. But it can turn nasty, if ill employed."

In modern Dublin the name ‘Samuel Beckett’ is synonymous with cycle lane design in the great tradition of Irish comedy.

(It is not generally known that Beckett wrote a play satirising British cycling campaigners but that’s a treat for another day.)
Posted by freewheeler at 09:10