The ‘Olympic improvements’ that are anti-walking and anti-cycling 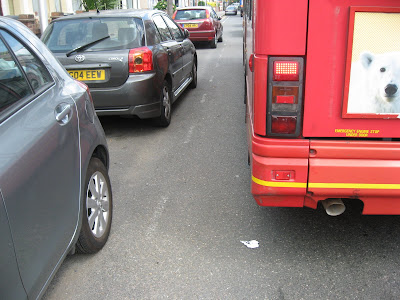 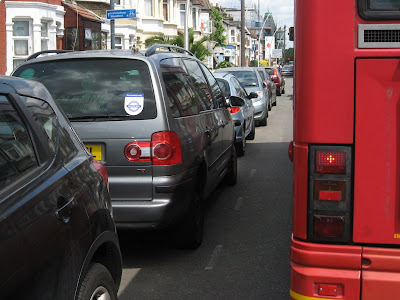 Relax, you’re on the London Cycle Network, Ruckholt Road, Leyton. The cycle lane is between the parked cars and the bus. Enjoy.


London boroughs are already taking the lead in delivery in many areas, and work closely with TfL on both pan-London and area specific cycling initiatives. Delivering a cycle revolution in Outer London will be a locally-led initiative that draws on the support of other agencies including TfL, LCC, London Councils and Sustrans.

Increasing cycling is an important new focus for Outer London, contributing to the cycling revolution taking place in the Capital.

gushes Delivering the benefits of cycling in Outer London.

Now let’s revert to the real world, where cycling and walking are under continuing attack and where a council like Waltham Forest continues to promote the interests of car drivers above all other transport user groups.

The current issue of the Council’s newspaper Waltham Forest News (issue 25, 9 August) has a page with the banner headline OLYMPIC IMPROVEMENT SCHEME STARTS. This is a scheme costing almost one million pounds, funded by the Department of Communities and Local Government and the Olympic Park Transport and Environmental Management Scheme. It involves work in the area around Ruckholt Road in Leyton and promises ‘to improve safety for pedestrians and cyclists’.

Whenever I read about ‘improvements’ I immediately turn to the traffic orders published in Waltham Forest News. Sure enough, there in the small print of the traffic order on page 14, is this:

In other words, on roads where no pavement parking currently exists, pavement parking is to be introduced. Only a lunatic or a car supremacist transport planner can regard encouraging motor vehicles on to footways as ‘improving safety for pedestrians and cyclists’. It degrades the walking environment and it increases danger to cyclists from ‘dooring’.

The Council’s website provides more fine detail. Note that the word 'cyclist' nowhere appears in this 'improvement scheme' and there is no mention of the atrocious conditions faced by anyone cycling on Ruckholt Road. Cyclists also do not appear in the illustrations and the idyllic photographs are not from Waltham Forest. The only titbit is the possibility of a bridge to be shared by cyclists and pedestrians at the southern end, but this is dependent on extra funding and land acquisition and may well never happen.

The proposals include the realignment of the kerb, which will reduce the carriageway width and increase the footway width. This will recess the footway parking bays in to the footway area, and will be at the same level. This will provide extended footways when the bays are not being used and protect cars when parked in the recessed bays.

The key motive here is explicitly to protect cars – NOT to protect pedestrians from motor traffic (since that minimal barrier supplied by the kerb is being eliminated) and NOT to protect cyclists, because they will be forced to cycle between parked vehicles and moving motor vehicles. The assertion that pedestrians will benefit from ‘extended footways’ when cars are not parked there is simply risible. These streets are already choked with parked cars.

A million pounds is being squandered on the promotion of car ownership, car use and car dependency, when instead that money could be spent on introducing segregated cycle paths on the Dutch model. Instead of getting rid of on-street car parking, the council is institutionalising it.

Boroughs can tie in with TfL campaigns such as ‘Catch up with the bicycle’ and ‘You’re better off by bike’ by working with TfL’s London Travel Awareness team and developing local campaigns featuring similar messaging that is consistent with wider TfL cycle marketing campaigns. TfL has produced guidance for boroughs on design standards for these marketing campaigns as well as making promotional photos available to boroughs to download.

The LCN+ is partly complete and additional signage or minor works can often complete useful routes for cyclists.

Delivering the benefits of cycling in Outer London

Ruckholt Road forms part of the LCN+ (i.e. London Cycle Network plus). Does anyone seriously think there is going to be a future 'cycling revolution' on roads like this?

For some context it’s also worth noting that

Outer London has also seen a rise in car ownership:

As Mark points out

Einstein once said that do something over and over again and expect a different result was true madness, and yet this is exactly what is happening here in the UK. The UK had a "National Cycling Strategy" back in 1996 which had an aim of doubling cycling by 2002 and doubling again by 2012. It was quietly abandoned by the Government in 2004 after the rate of cycling had actually declined over the previous 8 years. Over the past 15 years the number of cyclists on the road, by comparison to other transport modes, has grown smaller and smaller. Yet our cycling campaigns are still calling for the same thing over and over; more cycle parking, SMIDSY campaigns, even pot hole reports. None of the three major campaigns in the UK; Sustrans, the CTC or the London Cycling Campaign are calling for segregation outright. Did anyone spot the elephant in the room?

I would like to see a commitment from our three main cycling campaigns that this is what they are aiming for too, and that they mean to achieve this aim by lobbying for segregated cycle infrastructure. Otherwise I fear, for all the self-serving campaigns they can muster, the downward slide on the National Travel Survey can only continue.

Me, I think there is every reason for pessimism. Huge sums of money are still being made available for so-called improvement schemes which simply reinforce car dependency and which create fresh barriers to the development of safe, convenient, attractive cycling infrastructure.

(Below) The Ruckholt Road cycle lane. 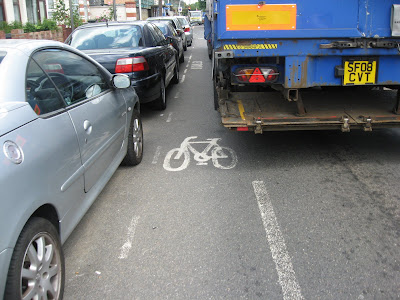 (Below) Can you spot the blue sign helpfully telling you that you're on the top class London Cycle Network? 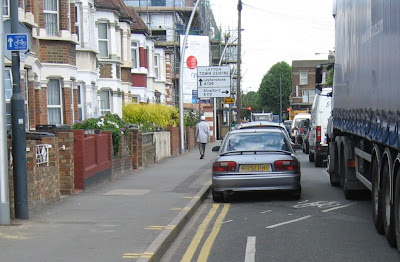