A new angle on cycling infrastructure 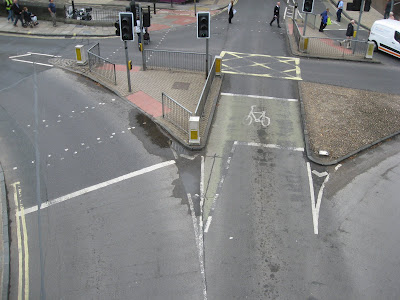 My photo shows an Advanced Stop Line at the junction of Leeman Road and Station Road, York, looking towards Rougier Street, photographed from the city walls.

Along comes a bendy bus. 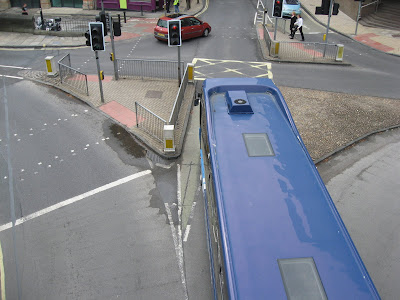 The driver has stopped his wheels outside the ASL but the forward part of the bus extends some two metres beyond the wheels. Cycling along beside the bus and squeezing into the ASL along that magnificent cycle lane would be inadvisable. If the lights turned to green while you were doing this the bus would hit you. The death-trap railings on the traffic island would trap you. You would be mangled or crushed.

The railings are there, of course, to serve as a cattle pen for pedestrians, who are allowed a few seconds at green to sprint to this refuge, where they must wait another couple of minutes to cross the rest of the road. Well, we wouldn’t want motor vehicles to be slowed down by pedestrians, would we?

As everybody knows, York is an iconic ‘cycling city’. Onwards with the cycling revolution!
Posted by freewheeler at 10:50