This year we have received £450,000 for cycling facilities in the borough from Transport for London.

The report is anonymous (why?) but I would guess it was written by the borough’s cycling officer, Gina Harkell.

Where did that money go?

Most of the work will improve existing cycle lanes usually by widening them where they have been deemed too narrow and not up to the safety standard now required by Transport for London’s Cycling Centre for Excellence.

I’ve searched the net in vain to find out what that “safety standard” actually is. The fact that I can’t find it, and that TfL’s ‘Cycling Centre for Excellence’ doesn’t seem to have a website immediately tells me something. However, I can tell from personal experience what this “safety standard” is. And it’s crap: 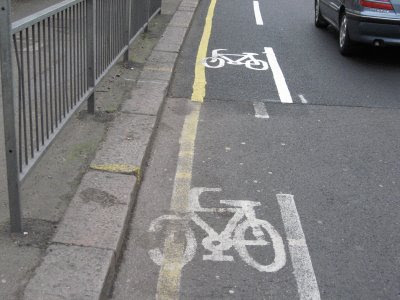 The only cycle lane in the borough which I’ve come across this year which has been widened is the one shown above – a short section of Hoe Street between Forest Road and the junction with St Mary Road. Plainly the white lining involved could only have cost a tiny fraction of £450,000. So where did the rest of the money go? Could we have a list of the other roads in the borough where the cycle lanes have been widened?

Alarm bells start to ring when I read the next sentence:

Sometimes cycle funds are added to a local safety scheme where the cycle networks cover the same roads.

Fascinating. ‘Local safety schemes’ may involve incidental benefits for cyclists (such as road humps which slow traffic) but they also involve benefits for pedestrians (pavement buildouts, pedestrian crossings) and benefits for motor traffic (new yellow line parking restrictions designed to prevent congestion and speed up traffic flow). It seems to me quite wrong that money which is supposed to be spent on cycling is siphoned off in this way. Sometimes ‘local safety schemes’ even make cycling more unpleasant and dangerous, as in the case of the borough’s disastrous programme of speed cushions.

So how much of that £450,000 was really spent on dedicated cycling facilities? The report to the Transport Liaison Consultative Group doesn’t say. Studious vagueness is the order of the day.

Officers should not be allowed to get away with reports like this. But in the London Borough of Waltham Forest anything goes. And if money supposed to be spent on cycling is being siphoned off and spent elsewhere in the transport budget that might explain why in a supposedly progressive cycling authority four out of ten local libraries have no cycle parking, and cycle stand provision is patchy, incoherent and grossly inadequate. Not to mention a zillion other ways in which cycling is marginalized and suppressed.
Posted by freewheeler at 08:35