Abandoning cyclists to their fate 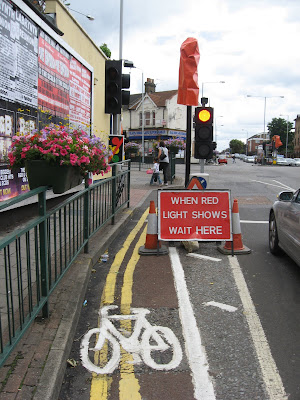 One of the glories of cycling in Waltham Forest is

a traffic light-controlled cycle filter at the Blackhorse Road/Forest Road junction. This halts all other traffic, allowing eastbound cyclists 10 seconds to get ahead of the traffic or to turn right without having to weave across three lanes.

Of course sometimes it’s not working! In which case you have a problem, as there is no Advanced Stop Line because you don't need one with this fabulous cycle filter!

On the morning of the recent Green Fair, I cycled into Walthamstow from Tottenham along the A503 - which should surely be renamed Boris Johnson Boulevard. And this (above) is what I encountered. The cycle filter had been switched off. Needless to say, there was absolutely no advance warning for cyclists. You only find out when you get there, by which time you are to the left of three lanes of traffic, with the lane nearest a left-turn-only lane. And I was going straight ahead.

The absence of any advance warning for cyclists, and the absolute indifference to the fate of any cyclist who is then stranded beside a lane of left-turning traffic, once again underlines the reality that cyclists are regarded as an unimportant species of road user, whose safety and convenience are of no real consequence to anyone.
Posted by freewheeler at 09:38