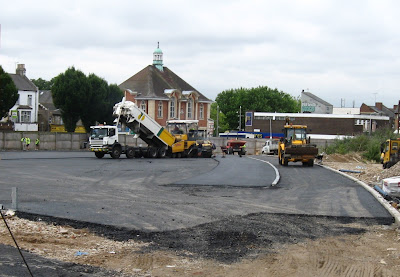 What's happening at the notorious arcade site in Walthamstow? It seems to be being turned into a vast expanse of tarmac. A new car park, perhaps?

Eight years ago the residents of the borough were invited to vote for one of four development projects on this site. The winning entry was then discarded by the Council, which decided to go for one of the unpopular proposals. Classic New Labour consultative democracy.

Still, even the unpopular proposal looked quite attractive - a library which resembled a space ship, a gym, exciting shops. But then, mysteriously, it never got built. The old arcade was shut down, which was a personal disaster for all those local shopkeepers who had built up a following over the years, and the buildings were demolished and the site bulldozed. And then it stayed vacant for six years. Schemes came and went, aroused strong local opposition, then evaporated. The last time I looked the Council had spent six million pounds 'maintaining' a waste plot full of weeds. There was a strong stench of dodginess about events but nothing ever emerged into the clear light of day.

The blue fencing (below) was put up during the demolition. Fair enough, we don't want pedestrians to be hit by splinters of brick. But this fencing involved the ostensibly temporary seizure of large amounts of public footway. Once the buildings were demolished, the fencing remained and the footway was never restored. Instead, car parking was introduced on the High Street, leaving pedestrians with a grotesquely inadequate footway width on one of the busiest streets in the borough. When I went past yesterday the contractors had fenced off even more footway. This was blatantly unlawful, as there is a planning procedure to go through before you fence off sections of public footway, even temporarily. But as the highway authority is the London Borough of Waltham Forest it is hardly likely to take action against itself. This crap council is indifferent to the rights of pedestrians and repeatedly breaks the law. 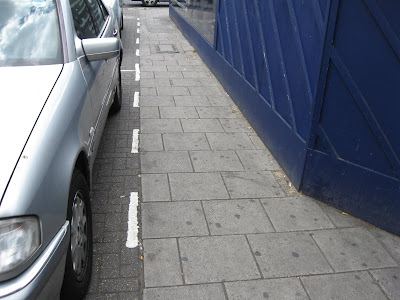 Posted by freewheeler at 08:47