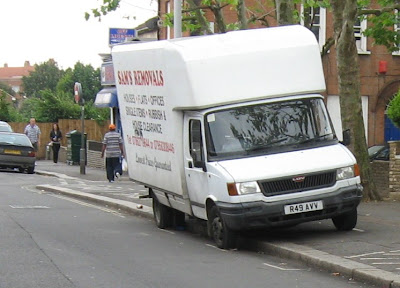 Making the pavement a free car park on Higham Hill Road E17. Apart from degrading the walking environment this also promotes speeding on a long straight road, making it unpleasant to cycle along.

Well worth reading is the London Assembly Transport Committee’s response this month to the Mayor’s Transport Strategy: Statement of Intent.

Our response to Way to Go questioned whether the major schemes so far proposed - cycle superhighways, Legible London and the cycle hire scheme – would be enough to achieve the significant increases in walking and cycling to which the Mayor aspires.

The Committee’s scepticism is entirely justified. Cycle superhighways have all the appearance of being nothing more than crap cycle lanes painted blue. I find it hard to get excited about superhighways when something as rudimentary as Advanced Stop Lines are both poorly maintained and massively abused by London drivers. If the GLA, the Mayor and Transport for London can’t even organise enforcement of ASLs, what hope is there? The attitude of London drivers to cyclists and cycling facilities is a major block to getting more cyclists on the roads, but this is something nobody wants to talk about, apart from Jenny Jones.

I’d never heard of ‘Legible London’. It turns out to be a TfL project involving new signs:

many people are put off by inconsistent signage and confusion about distances between areas.

Now it’s true that signing for pedestrians in London is inadequate and laughable. But I don’t think that’s the real reason why people don’t walk. It’s because pedestrians are treated as an inferior species to drivers. They have to wait long periods of times to cross the road at green. Motor vehicle traffic flow is the number one priority. The 4X4 driver who chooses to drive into the West End enjoys a more privileged status as a road user than a pedestrian. And beyond such matters, pedestrians are diverted and penned behind by railings like cattle. Or they are sent down desolate, neglected subways (that grotesque labyrinth at Marble Arch, for example). They have to scamper across lanes of traffic where drivers are often breaking the speed limit or chatting on mobile phones. Where facilities do exist for pedestrians they are, just as they are for cyclists, all too often obstructed by selfish drivers. Drivers routinely park across pedestrian crossings when the green light is on for walkers; there are no road markings to deter them and no will to make this an enforceable offence.

Pavements are cluttered with random and anarchic clusters of street furniture. Businesses unlawfully block the footway with signs and local authorities everywhere turn a blind eye. These are all problems which have been identified on numerous occasions in the past. The Livingstone mayoralty came up with regular documents about promoting walking. They were perfectly worthy and entirely toothless. They foundered on the resistance which is always to be found at a local authority level, from Councillors - especially Conservative ones - and/or highway engineers and planners, who are predominantly able-bodied men with car allowances and free work parking.

The future of cycling is no rosier. The Committee notes that

The current proposals for cycle superhighways into central London and the central London cycle hire scheme will not reach the bulk of potential new cyclists, which the Mayor will need to encourage if he is to achieve his aspiration of a 400 per cent increase.

Even if they did, I don’t think it would make a blind bit of difference. Cycling and walking are going nowhere in an outer London borough like Waltham Forest. There is certainly some evidence of stagnation when it comes to cycling in outer London. Here are three sites in London where cycling has NOT doubled since 1997. These are counts taken by the London Borough of Waltham Forest over a twelve-hour period, 7 am – 7 pm. The counts in 1998 and 2002 were made in October, those for 2006 and 2007 were made in July.

The reason why cycling has not risen on these routes is, I suspect, the issue of personal safety. On the road you encounter high volumes of traffic and reckless drivers; off-road you all too often encounter a lonely, glass-strewn neglected environment.

The situation for pedestrians is no better. Year after year the Council turns over more and more pavements to legalised pavement parking, purely in order to accommodate the well-heeled minority who require on-street parking for their bigger vehicle (People Carrier or 4X4) or that third or fourth car. Even the pedestrian’s last refuge, the pavement, is stolen on behalf of car-dependent households. The streets of London favour the multiple car owning household, not the car-free household.

Over 20 per cent of journeys are made on foot and £34 million is to be spent on initiatives addressing the needs and safety of pedestrians in the three years to 2011/12.

It sounds an impressive figure but the reality is that pedestrians do not enjoy even a statutory legal minimum footway width. Waltham Forest council, like all others in London, flouts recommended minimum widths for pedestrians in order to accommodate on-pavement car parking.

For walking in particular, there is a need for new ideas and innovations for beyond 2012 to ensure London becomes an increasingly pedestrian-friendly city.

Well the Committee should take a look at the history of the 1985 footway parking ban. That was a very progressive piece of legislation. Its main enemy was local authority highway engineering departments, who cynically exploited a loophole to use it not to halt pavement parking but to create it. The 1985 ban failed to establish a mandatory minimum footway width for pedestrians, while at the same time allowing councils to introduce footway parking on what was vaguely defined as “narrow streets”. This was used to sabotage the ban, and footway parking in Greater London has rocketed since 1985, except now it is legal. Reclaiming those pavements for pedestrians would involve telling many car-owning households that they cannot park in their own street. I can't see that happening, can you?

Alongside schemes to provide new capacity, we believe London’s growth will mean measures to influence travel behaviour will become inevitable. The potential scale of benefits and efficiencies to be gained from pricing schemes makes them look potentially attractive. However, there are obvious political barriers to their introduction, not least as there could be public opposition to such a proposal.

Well exactly. Car owning households are now in the majority. And though Boris Johnson may contain some interesting contradictions as a politician, at the end of the day he is the friend of the motorist, not the pedestrian or cyclist. But even if Ken Livingstone had been re-elected, I still think London would be going backwards, not forwards. The problems begin at a local level; the current Mayor simply replicates them.

The London Sustainable Development Commission’s London’s Quality of Life Indicators 2008-2009 report (of which more soon) has some interesting revelations, which underline how, transport-wise, London is going backwards, not forwards.

Traffic volumes in London increased between 2002 and 2006.

That occurred under Ken, not Boris. 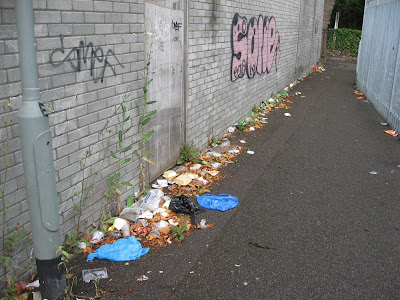 (Above) Who'd want to walk here? Footpath to Walthamstow High Street from South Grove E17.
Posted by freewheeler at 09:04