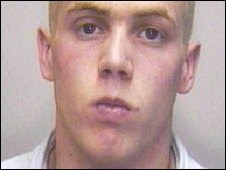 This killer driver got a stiff jail sentence (effectively five years) but he’ll still be allowed to drive again.

Hilda Jepson, 88, had campaigned for a crossing in Sutton Road, Huthwaite, where she was killed on May 17.

Lee Pell initially lied about the amount of alcohol he had drunk, claimed the sun had been in his eyes and said Mrs Jepson had jumped out in front of him. But a breath test showed Pell was twice over the alcohol limit. Cameras confirmed he was speeding and CCTV of the incident showed Mrs Jepson crossed the road from the opposite side to Pell, giving him plenty of time to slow down.

This driver is just 24 years old and has now been convicted FOR THE FIFTH TIME for drunken driving. On this occasion he ran down and killed a pedestrian.

But not to worry. The right to drive is the most basic human right of all and almost nothing a maniac driver can do will ever result in being permanently banned from the roads. This case has not provoked a squeak of protest from any politician and appears to have been ignored by every national newspaper apart from the Independent.

The court was told Pell was banned in 2002 for drink driving and on three other occasions for driving whilst disqualified and with excess alcohol.

A breath test showed he was more than twice over the drink drive limit and CCTV footage showed he was travelling at around 50 mph just before the collision happened.

The judge told Pell he was driving 'far too fast' and there was 'no justification to why you did not see her'.

Pell was sentenced to 10 years' imprisonment and was also handed a 10-year driving ban.
Posted by freewheeler at 11:09