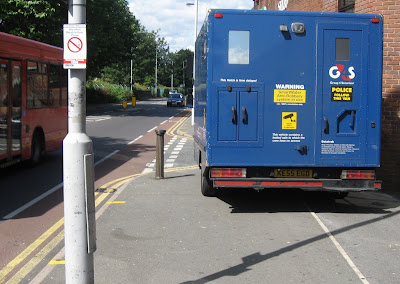 This G4S van driver only gets nine out of ten for footway obstruction. Foolishly, he left a small space between the van and the bollard, enabling able-bodied pedestrians to squeeze past. However, top marks for preventing access for people with buggies. (Friday)

This van is also parked right by the exit of The Mall underground car park, cleverly ensuring that any driver turning right on to Selborne Road has an obstructed view of oncoming traffic, obliging such drivers to pull out across the cycle lane to see.

The driver could have used the private entrance for delivery vehicles, which accesses all premises in The Mall from the rear, but that would have taken away all the fun. Besides, he had a police escort. Some people might say that having two officers in a police car trailing around after a bullion van all day is a waste of police time, but I expect there is a simple explanation. Perhaps top Met commanders get directorships with G4S when they retire.

I was a bit surprised that the two cops in the car (below) didn't spring out and ask me what I was up to when I positioned myself in front of them and photographed the van. Then I remembered that cyclists possess the same amazing powers as Harry Potter. Once you mount a bicycle you become completely invisible to anyone inside a car. It's magic. 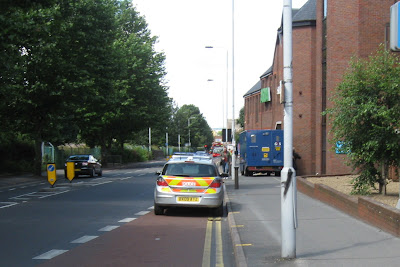 Posted by freewheeler at 08:56