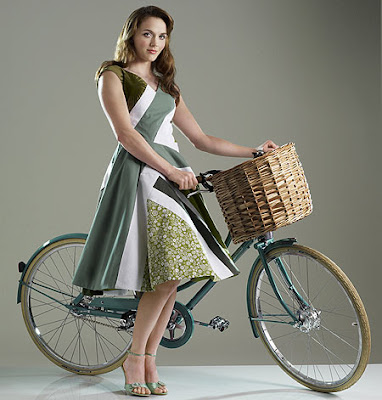 Victoria emphasizes the need for cyclists to wear sensible shoes

There has been a 107% increase of people cycling on the capital's main roads since 2000, according to Transport for London

Gosh, and last week it was only 91 per cent! By Wednesday next week I wouldn’t be at all surprised if it had jumped to 123%.

It's nice to see that TfL (and the CTC) now apply these statistics not to 'cycling in London' but to 'cycling on the capital's main roads'. Strictly speaking the statistics apply only to cycling on 40 selected London main roads. It is still unclear to me which roads are the chosen ones, how the count is taken (it is 'automated', whatever that means) or, more crucially, when the measurements are taken.

Curiously, tucked away in the online archives of the Waltham Forest Cycling Campaign, I came across the revelation that the Council’s figures for cycling in Waltham Forest used to be based on a 12-hour count taken on a day in October. In 2006 they switched the count to the month of July. Which is a clever way of massaging the statistics, since it is undoubtedly the case that the warm weather and the long summer days of July bring out more people on their bikes than October, when the weather is likely to be poorer and it gets dark much earlier. Nice one, London Borough of Waltham Forest!

How can the momentum be maintained? asks Tim Lewis

Women have proved less enthusiastic about converting to two wheels. Research in February from Sustrans, the sustainable transport charity, revealed that four out of five women never cycle, and fewer than one in 10 cycle more than once a month. The study highlighted the perceived danger of roads as a primary concern, but Amy Fleuriot, whose women-specific Cyclodelic clothing range will launch in September, believes the problem goes deeper. "All the images you would see in the media were men clad in Lycra and going fast and that doesn't appeal to a lot of women," she says. "They think you have to buy all this specialist kit and you're going to get sweaty and that's not the case."

The challenge for the government and bodies like the CTC will be to replicate the success of London in other British cities.

Yes, we need more places in Britain to replicate the successful and friendly cycling environment of London local authorities such as the progressive, pro-cycling Borough of Waltham Forest.

One incentive to non-cycling cities should be the statistics that indicate that, paradoxically, the more cyclists on the road the fewer accidents there will be. "At the very least, we should set an ambition to double cycling within the next 10 years," says Chris Peck of the CTC.

What we really need, of course, are not targets, the glitter of statistics or expensive publicity campaigns urging people to cycle, but a massive transformation of the cycling infrastructure in conjunction with a serious effort to tackle bad driving and cyclists’ exposure to risk. As things stand I am not persuaded that any of this is going to happen.

Nor is Christian Wolmar

Just because the number of cyclists in London has increased greatly in recent years does not mean there are a host more ready to jump on their bikes. Indeed, the opposite may be the case.

A decrease in London cycling? It’s possible I suppose. I used to know four people who’d given up cycling but now the total has risen to five. Someone who took up cycling a couple of years ago with great enthusiasm and who has now packed it in. Some days, after particularly bad experiences, I feel the same way.

I had the realisation some years ago that no-one starts cycling merely because of statistics. In reality, apart from occasional blips, the rate of cycling in the UK has been in a long term decline for the last 50 years. Over those years, the conditions on the streets have become less and less pleasant for cycling.

Even if it were true that safety came only from numbers, Britain simply can't achieve the numbers necessary to achieve that level of safety because the experience of cycling is simply too off-putting for the majority to take part.
Posted by freewheeler at 08:52