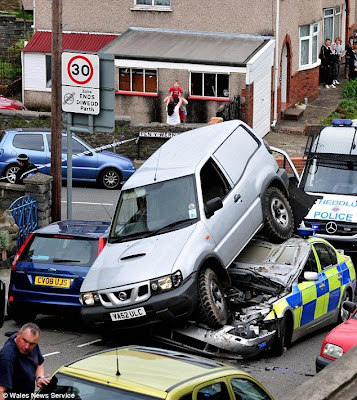 Davies had been spotted using a mobile phone at the wheel by PC Greg Parry who was driving the BMW police car but a chase began when Davies refused to pull over.

Davies accelerated away, struck a van, causing the driver a whiplash injury and finally stopped in Siloh Road, Landore, when the police car pulled in behind him.

Swansea Crown Court heard that Davies twice reversed over the BMW. Patrick Griffiths, prosecuting, said Davies then got out of the vehicle which was partially in the air and shouted : “Come on then, come on!”.

He ran off but was arrested soon after by a police sergeant.

Father-of-two Davies, of Penlan, Swansea, was jailed for six years after admitting attempting to cause grievous bodily harm to a police officer and dangerous driving.

I’d like to know what driving ban was imposed but no news report mentions one.
Posted by freewheeler at 08:13