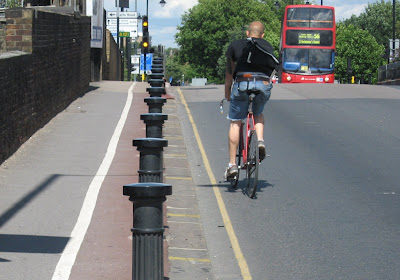 This blog is not afraid to criticise cyclists who need criticising. And frankly it doesn't get much worse than this, does it?

The London Borough of Waltham Forest has gone to a lot of time, effort and money to create this superb off-road cycle lane on Lea Bridge Road (aka the A104), which is a major commuter route linking Waltham Forest and Hackney. As you can see, this cycle lane is clearly marked out in pink, is separated from pedestrians by a continuous white line, and a line of iron bollards in the centre of the lane offers magnificent physical protection from the ever-present danger of a surprise attack from the south by an armoured division. Yet, incredibly, most cyclists on this route seem to prefer to ride in the road rather than on the pavement.

This cyclist is typical of the reckless anarchist mentality to be found on London's roads. He is not wearing a helmet. He has no high visibility light-reflecting yellow gear. He is even wearing a black T-shirt! (Anarchists often wear black, of course.)

This cyclist is virtually invisible. He is wilfully neglecting to use an off-road cycle lane. He has no helmet. Should he be inadvertently run down and killed by a lorry driver, a van driver or a car driver, it would hardly be surprising if the police and the Crown Prosecution Service agreed that no charges should be brought.

Cycling in London generally is a load of bollards.
Posted by freewheeler at 08:30