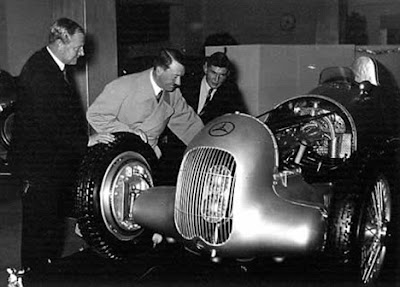 
Ever wondered about the roots of the BNP's policy of abolishing all speed cameras?

It seems that motor-racing has a special appeal to those of a hard-right mentality. On one hand, there is the aggressive delight in the fusion of man and advanced technology — a recurrent theme for fascists and national socialists over the years. A hatred of tradition and devotion to modernism was a central part of totalitarian rhetoric throughout the 1930s. In the same vein, there is the glorification of masculine strength and discipline, a preference for action over talk, and a loathing for anything that smacks of weakness or compromise.

Enzo Ferrari, the racing driver who went on to found the legendary car company, was a keen fascist and supporter of Mussolini.

Hitler’s manic determination to see Germany triumph on the world stage of motor racing led him to push the auto industry to new heights of engineering and sporting perfection, led by teams from two of the biggest companies, Mercedez-Benz and Auto Union, the forerunner of the Audi company.

Hitler salutes were given to the winners at major races, and Nazi regalia was ever present at the major events.
Posted by freewheeler at 08:06