This afternoon the Green Fair took place, which as the Council's website explains is

The Green Fair aims to raise your awareness of green issues with fun and interactive displays and show how we can all make changes to our lifestyles to help create a sustainable future.

We have up-to-date information from recycling and the Council’s enviro-crime campaign to nature conservation and climate change, with people to talk to about how we can all live greener lives.

(Below) As you would expect, all the important people involved in the Green Fair arrived by London's most important travel mode. No one used a bicycle and cart, and there were no bike and cart displays. They might go in for that sort of nonsense in Copenhagen and the Netherlands, but we certainly don't want it in London. 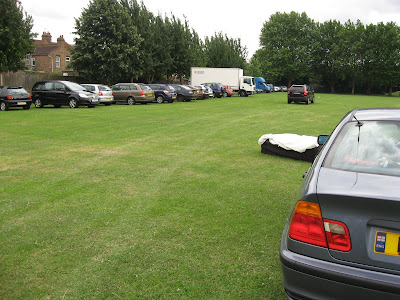 (Below) As usual, the Green Fair had superb cycle parking facilities.

We might be approaching the second decade of the twenty-first century, but Lloyd and Aveling Park contains not a single cycle stand. Which makes it the perfect venue for London Borough of Waltham Forest Greenwash. 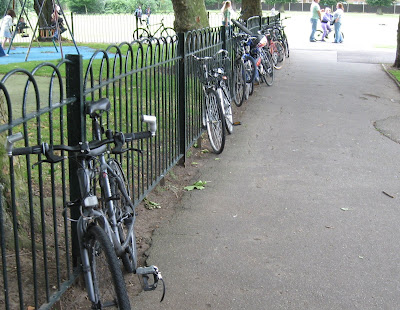 (Below) As happens every year, the Mayor turned up to the Green Fair in a limousine, to press home the message that we all need to walk and cycle more. And as you can see, even the walk from the park gates is out of the question when you are an important person. 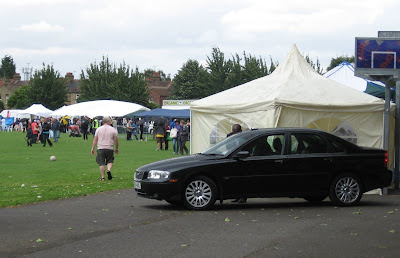 One of the key messages of the Green Fair was the need to save energy. I picked up some lovely leaflets as well as a nice free cloth bag with the message SWITCH IT OFF. On my way out of the park I noticed that there was a large light blazing away in broad daylight, illuminating the car park outside the theatre on the island. What's more I blogged weeks ago about two lighting columns blazing away in broad daylight on the off-road cycle lane beside the North Circular. Today (below) they were still burning brightly at 11.30 a.m. 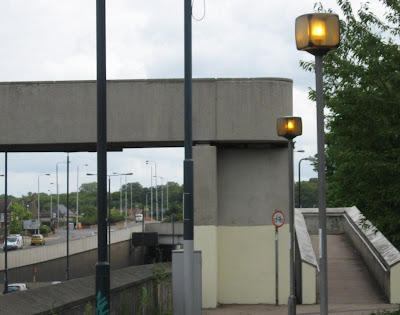 (Below) Amazingly, just beyond the other two there is now a third lighting column, also burning brightly, on the cycle lane near the junction with Garner Road E17. It's another sign that neither the local ward councillors nor anyone from the Council ever goes near this route. 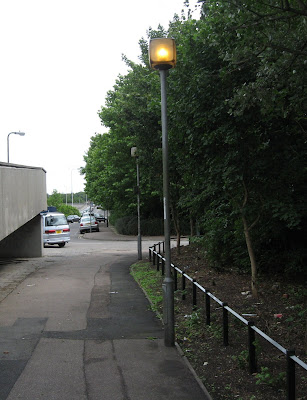 The Green Fair had a Metropolitan Police stand, full of 'car crime' crap. The Met's number one environmental priority is reminding drivers to lock their car doors.

Another stand had lots of 'road safety' stuff. I picked up a booklet. For all those foolish, risk-taking pedestrians out there, there was this stern warning:

Wearing dark clothes at night means drivers may not be able to see you until they’re really close – and by then it may be too late. Make sure you can be seen at all times.

Yes, a white shirt, white socks, white shoes, white trousers or skirt, and a white coat could make all the difference in court when it comes to contributory negligence.

As for cyclists. ‘Champion trials rider Rich Johnson’ has a blood-curdling message about cycle helmets. Rich personally knows someone who ‘took off his helmet because he was hot’. Next thing he ‘hit his head and died.’ Rich Johnson says, ‘It’s a no-brainer – wear a helmet or suffer the consequences’. Are you listening, Rob Ainsley?

'Coming from a guy who loves taking two-wheels to the limit, you’d be dumb not to take Rich’s advice.’

Rich Johnson is an entertainer who does dare-devil stunts, displaying skills which are only likely to be useful in specific cycle lane situations.

Presumably Rich has never heard of Mayer Hillman, who argues that

By wearing helmets, cyclists are at best only marginally reducing their chances of being fatally or seriously injured in a collision with a motor vehicle which is the predominant cause of these injuries, and that cyclists may be less likely to have an accident if they are not wearing a helmet and therefore ride with greater care owing to an enhanced sense of their vulnerability. Second, that tackling the source of accidents in which cyclists are involved has far greater scope for reducing head injuries than the arguable benefits of promoting helmet wearing among cyclists.

Cycle helmets have an unproven record of fulfilling promises of better safety. A study of cycling casualties in Greater London from 1984 to 1996 during which time helmet use rose from virtually nil to just under 40 per cent reveals no reduction in any severity of injury to reflect increased helmet wearing. Indeed, crashes were on average more severe at the end of the period than at the beginning.

In fact by wearing a helmet and using a cycle lane you may well simply be increasing your exposure to risk.

This ‘road safety’ advice is produced by Waltham Forest Council in association with RoSPA, Think Road Safety and Road Safe – all organisations committed to the avoidance of the true causes of road carnage and determined to avoid the essential need for danger reduction. Why bother with bad driving when you can blame its victims?

The Green Fair is sponsored by Verdant

who are responsible for these lovely blue bags below, on Buxton Road E17 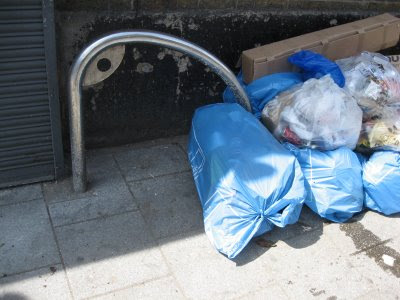 (Below) This morning, before I went to the Green Fair. A typical top class cycle stand in Waltham Forest. Permanent obstruction of the cycle stands on Mission Grove E17 has been repeatedly drawn to the attention of this crap Council, and this crap Council has done... nothing. 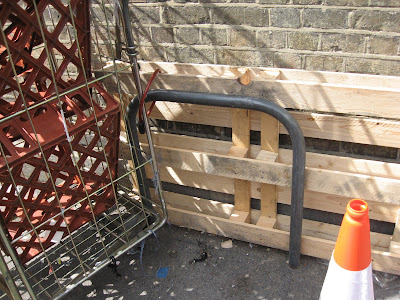 (Below) Let's face it - there's nowhere greener than Waltham Forest. Cycle stand at the junction of High Street and Storey Road E17. Today. 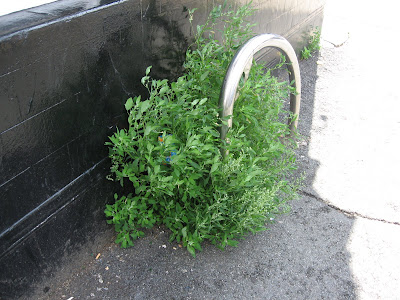 Posted by freewheeler at 18:06