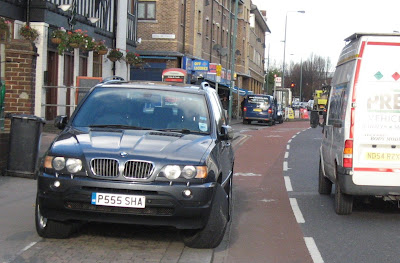 Hilariously, its closing words are:

So far, monitoring cycle levels shows that the number of cyclists is increasing as the new facilities are being introduced. Whether it ever becomes as popular as in Holland remains to be seen.

I am no more gifted with clairvoyancy than the next person, but let me articulate this insight into the future with some confidence. As things stand, cycling in the London Borough of Waltham Forest is never in a million years going to become as popular as in the Netherlands. And the only monitoring that’s worth a hill of beans is modal share, not statistics which derive from counts taken on major routes commuter cyclists can’t avoid, and which originate in cycle counts moved from October to July, because that way you’ll get better results.

But that is by the way. Today I want to focus on page eleven of the Action Plan (in section 3.1) and particularly the first photograph (which resists my attempt to download it, and will therefore require you to call up the Plan and scroll down, if you can be bothered).

are generally between 1- 1.2 metres wide increasing to 2 metres in parts of High Road Leytonstone. Most of the borough roads are 8 metres wide or less so 1.5 metre cycle lanes are not possible without collisions between opposing large vehicles.

But, gloriously, as the first photograph on page eleven shows

The Action Plan photograph I refer to was taken just beyond the BMW shown in the photograph above, looking in the direction that the white van is going. A pathetic little stretch of wide cycle lane, quite untypical of High Road Leytonstone. Spin over substance, in short. It's meaningless, but it looks good in a promotional photograph.

Those Action Plan claims are specious. To say that a 2 metre wide cycle lane is not possible along the entire length of High Road Leytonstone is quite simply untrue. Such claims evade the question of footway width. The pavements on High Road Leytonstone are exceptionally wide and could easily accommodate cycling infrastructure on the Dutch model without detriment to pedestrians. Instead, they are used for parking bays. 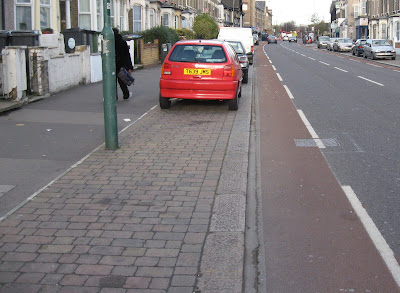 Too many cyclists seem incapable of imagining a different world to the one that oppresses them. Thus ‘James’ asserts

The problem is that in London and many large UK cities the roads simply could not fit an off-street cycle lane, full stop..

I used to believe the same thing myself, but not any more. On High Road Leytonstone the potential exists for a 2.5 metre wide cycle lane (or more) physically segregated from motor traffic. But you have to get rid of the on-street parking. And there’s the rub. Waltham Forest's transport planners are wedded to car dependency, and would never dream of suggesting getting rid of those parked vehicles. And no local councillor, whether Labour, Lib-Dem or Conservative, would countenance such a move. People must be allowed to acquire vehicles, irrespective of size or how many they wish to own, and if they have no off-street parking for them, then the street or footway is the place. And pedestrians and cyclists must pay the price for that, in terms of their own safety and convenience.

And so High Road Leytonstone is dedicated to vehicles like that legally parked monstrous gas-guzzling BMW 4X4 shown in my first photograph. The parking of that 4X4 takes precedence over safe and convenient cycling. And realities like this are why I can't share the fizzy optimism of those cycle campaigners who imagine a joyous future of mass cycling in London. I don't think you are ever going to persuade people out of cars in order to cycle down streets like High Road Leytonstone - not on crap cycling infrastructure like this.

Cycling's modal share in Waltham Forest is negligible, and likely to remain so until the provision of infrastructure on the Dutch model. But far from re-allocating street space from the car to cyclists, Waltham Forest council with its five new 'neighbourhood improvement schemes' is shamelessly stealing from the pedestrian and giving to the car owner, and diverting kerbside cycle lanes into the middle of the carriageway in order to accommodate new parking bays. In this part of London cycling and walking are getting worse, not better.

In short, the problem is political not technical. It's a matter of vision and political will. But Britain's two biggest cycling organisations remain committed to integrationist policy, which requires cyclists to share streets with high volumes of motor traffic, in conditions like the one shown here. Attempting to ameliorate conditions for cycling through integrationist cycling facilities plainly isn't working, because it still leaves cyclists exposed to danger, obstruction and delay. That's why so many British cyclists feel obliged to dress in luminous yellow clothing and wear helmets. They are dressed for a battlefield, not a pleasant stress-free cycle journey. That's why at present in Britain only 1.5% of all trips on average are by cycle. I don't myself believe this figure is going to change as long as integrationism remains at the heart of British cycling provision. Its best practice is feeble and cycling infrastructure remains subordinate to the supremacy of the car.

In the Netherlands they have successfully broken with mass car dependency, and moved towards a situation where a staggering 93% of the population cycle at least once a week. But this has only happened because of the provision of safe, convenient, segregated infrastructure, which prioritises cyclists over motor traffic. It's a reality which many British cycling campaigners seem very reluctant to acknowledge.

(Below) Infrastructure for car parking - not a safe, segregated cycle lane. A little further down the road from the site of the photograph in the Action Plan, where, allegedly, a safe cycle lane is 'not possible'. 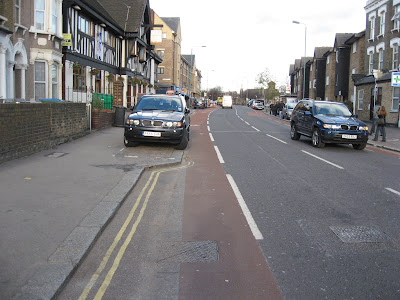 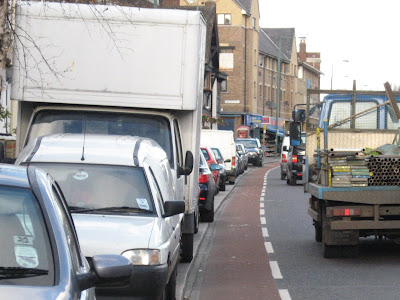 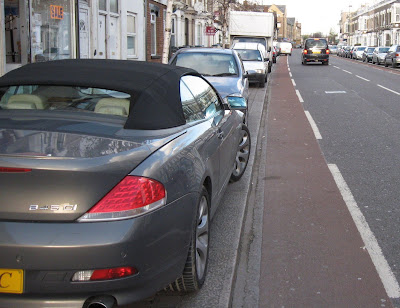