Having last month analysed three of the London Borough of Waltham Forest’s forthcoming five ‘neighbourhood improvement schemes’, the central thrust of which is to expand car parking at the expense of the safety and convenience of cyclists and pedestrians, let me now turn to ‘The Westward Road Area E4 Neighbourhood Scheme’. It involves changes to seven streets: George Road, Leonard Road, Burnside Avenue, May Road, Bateman Road, Ashley Road and Westward Road – a grid of residential streets, west of Chingford Mount Road (A 112).

No matter how the Council wriggles and slithers and pretends that these schemes benefit everybody including cyclists and pedestrians, one central feature of this scheme, as of all the others, is unambiguous: “As part of the scheme the Council have introduced where possible additional parking bays”. In other words, car dependency is to be encouraged, not discouraged.

The central thrust of the scheme is “to improve traffic flow on these narrow roads and reduce driver confrontations”.

Why do “driver confrontations” occur? Because the Council has allowed free on-street car parking to fill up both sides of the street, meaning that there is often not a space for drivers to pull over in order to pass. In other words, parked vehicles cause problems for the flow of moving vehicles. Some drivers are infantile individuals who require instant gratification of their own perceived needs, which means they think the other driver should always give way and reverse. When one infant meets another such infant, much red-cheeked screaming ensues.

Needless to say the obvious solution – get rid of the on-street parked vehicles which are causing an obstruction, by introducing 'no waiting at any time' parking restrictions – is literally inconceivable to the mind of a Waltham Forest transport planner. The car parking must be accommodated at all costs, and so must the traffic flow. Therefore the price for resolving this vexed issue must be paid for by pedestrians and cyclists, by re-allocating pavement space for car parking, and introducing one-way systems irrespective of the convenience and safety of cyclists.

An example of this madness. The photograph below shows the pavement outside number 52 Westward Road, looking east, towards Chingford Mount Road . It’s a narrow pavement where two pedestrians can just about walk comfortably side by side. The proposal is to allow cars to park on this pavement all the way to the end of the road. (And incidentally isn't it strange how the hordes of people who rage over cyclists on the pavement fall completely silent when proposals to allow people to drive on to pavements and park on pavements are put forward.) 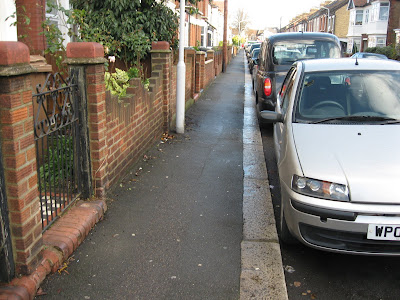 Parking on this pavement will at a stroke degrade the walking environment, forcing pedestrians to walk in single file. It’s also entirely predictable what will happen, because it’s happened on other streets which have received this treatment. Vehicles will park beyond the markings (which, based on tyre position, do not in any case take any account of wing mirrors and vehicle type and size), the markings will fade, the pathetic little strip left for walking will suffer intermittent obstruction. Ironically, this happens elsewhere on Westward Road, where pavement parking has previously been permitted:

(below) Obstruction of the footway on Westward Road. A wheely bin placed opposite the bonnet of a pavement-parked car. 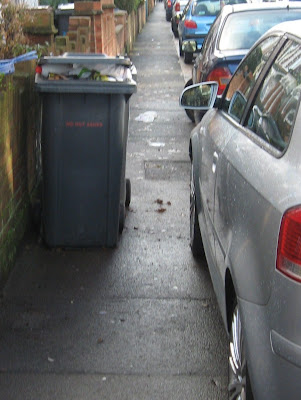 Four streets will be made one-way (George Road, May Road, Bateman Road and Ashley Road) and Westward Road will become one way between Ashley Road and Chingford Mount Road. This of course has implications for any cyclists who either live on these streets or who use them, because it requires them to take different routes, longer routes or busier routes. Needless to say the Council has done no research into cycling flow in this neighbourhood area, because cycling flow is of as much indifference to it as walking flow. It is only motor vehicle traffic flow and parking that are of concern to the officers of the borough and its councillors, not a single one of whom, as far as I’m aware, has raised any objections to these schemes.

(Below) Leonard Road E4, a bus route. Parking will be allowed on the pavement on both sides of the road, assisting those residents who choose to buy larger vehicles such as 4X4s, or the BMW and van and Light Goods Vehicle shown in the photograph. (This photo was taken on a Sunday, so almost certainly shows residents' vehicles rather than those of people engaged in business.) 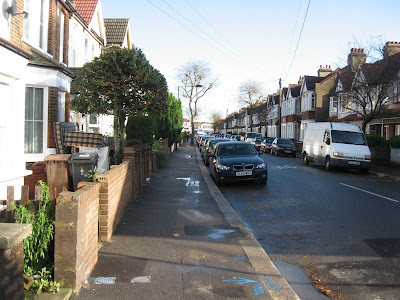 Astonishingly, even what little green open space exists in this neighbourhood has been earmarked for car parking bays, by officers whose appetite for creating more car parking is insatiable. On Burnside Avenue a bus stop and shelter will be moved, a grass verge seized, trees cut down, and pedestrians diverted, simply in order to accommodate more parking. (See photo and plan below)

All three parties represented on the Council support unrestricted on-street car parking by households with no off-street car parking. There are no restrictions on multiple vehicle ownership or size of vehicle ownership, other than in Controlled Parking Zones, where there is a charge, but small enough to be inconsequential to an affluent household. In any case, this particular scheme is not in a CPZ, and parking is free.

How many households on Westward Road or the other roads don’t own a vehicle? The Council neither knows nor cares. (The 2001 Census revealed that the percentage of households in the borough which didn’t own a car or a van was 38.95 per cent.) Its primary transport policy commitment is to vehicle ownership and use. At the same time the Council produces Climate Change policy documents which bear no relation at all to its actions and which are every bit as pointless as the Green Charter. Truly this is indeed the age of stupid.

(Below) This space is being disgracefully wasted by grass and trees, and will be transformed into parking bays. Burnside Avenue E4. The bus stop will be moved to benefit car parking, and pedestrians will have to walk further, diverted round the back of the bays. 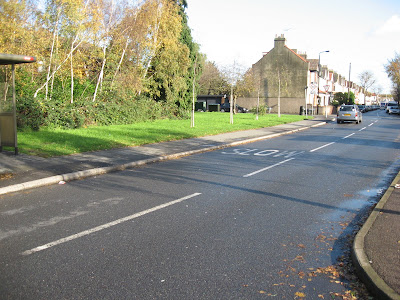 The above photograph is taken from the mouth of the side road shown at the bottom left of the plan, with the new parking bays, marked in slanting blue lines, indicated by the arrow. 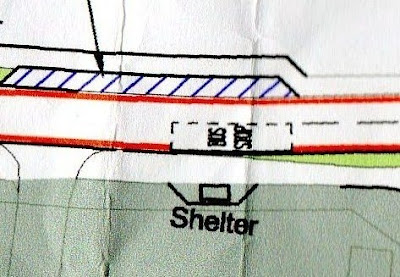