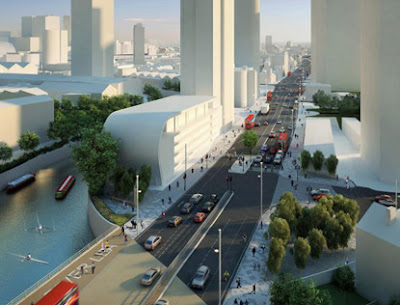 New York's Fifth Avenue may be worlds away from London's East End, but work has begun on a £10 million scheme to turn Stratford High Street into a “Manhattan boulevard”.

The mile-long route is a key access point for the London Olympics and will form part of the 2012 marathon.

A facelift aiming to “breathe fresh life” into the high street will replace roads and pavements, remove railings and street clutter, improve lighting and plant 70 trees and 3,500 shrubs.
Authorities hope this will work in tandem with a series of major developments planned for the area.

A computer-generated image shows how Stratford High Street could look by the end of the decade once developments that already have planning approval are completed.

And it’s so realistic! A six lane superhighway with no bus lanes, no pedestrian crossings, and no cycle paths! A completely crap environment for everyone except Jack Slob in his turbo-charged Ford.

(If Waltham Forest supplies a basic unit of crap, Hackney is double crap, but Stratford is quadruple crap.)
Posted by freewheeler at 09:16