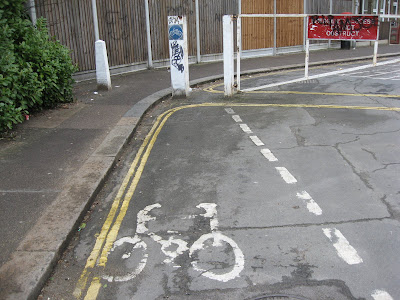 (Above) Walthamstow
(Below) Groningen 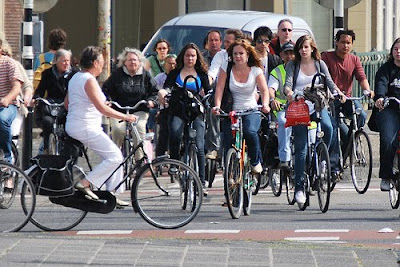 You can see at a glance the obvious superiority of British cycling infrastructure. This marvellous facility on Edinburgh Road E17 represents "permeability" at its finest. It prevents cycling anarchy of the sort to be seen in that second photograph, which shows Groningen where people cycle as many as seven abreast and nobody wears helmets. If those people in Groningen tried using this special Walthamstow permeability facility they would obviously collide. And as any Jersey child cyclist will tell you, we’d then be looking at brain damage on a truly apocalyptic scale.

(Below) Look at this woman in Denmark. Instead of spending her income on a People Carrier to drive her children to their nursery like any normal British person, this crazy foreigner has obviously frittered away her money on clothes and having her hair done. As a result she is reduced to transporting her children in some sort of weird wooden tub on wheels. Apparently it’s called a Christiania, after a notorious commune full of drug-taking hippies. No wonder one of her children is screaming in terror and embarrassment. 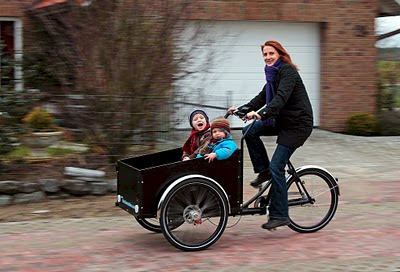 British cycling infrastructure cleverly puts a stop to all this foreign cycling nonsense. The Edinburgh Road cycle access facility is inexpensive, costing only £8.50p (apart from the design consultancy fee from Esom, Loakes & Robinson, which adds just £476,000 to the final bill).

Cycle access like this makes cycling much safer by preventing the transportation of children in wooden tubs. There’s no way you’d get a Christiania through this gap. No coincidence that this dedicated cycle access is just a few metres from Edinburgh Road Primary School! 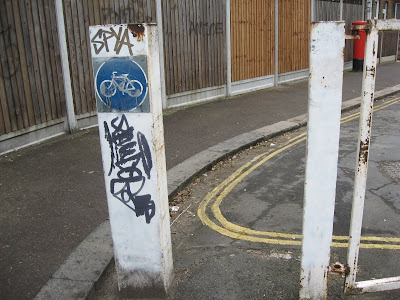 Posted by freewheeler at 09:51