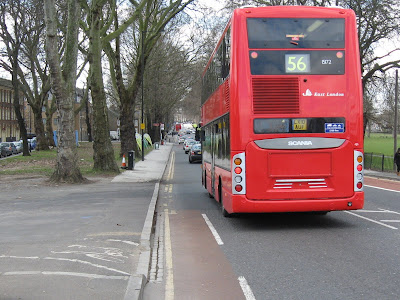 As we enter the cycling paradise that is Hackney see how the lovely pink 'advisory' cycle lane fizzles out. This is if you are travelling south from Waltham Forest along Lea Bridge Road (A104). Commuter cyclists intending to take a route that leads them towards Homerton Hospital or Hackney Town Hall should turn off to the left and follow those faded markings in the foreground. Signing? Of course there isn't any signing. Once you've missed it a few times you'll soon discover this route for yourself.

Hackney? It’s so frabjous for cycling you could almost be in Amsterdam or Copenhagen! Well, that’s what the bloke says in this documentary. In which the LCC's Mr Big, Koy Thompson, also fizzes enthusiastically about permeability. And does his usual thing of explaining how cheap providing for cyclists is. Thanks a million, Koy, because cheap is how I feel, as a cyclist in London.

Thousands of people cycle in Hackney daily, and Hackney not only has the highest percentage of people cycling to work in London out of any London borough (6.83%), but also the UK's largest increase in cycling from 1991-2001 based on a comparison of census data from these years. The latest Transport for London research shows that 8% of all journeys in the borough are by bicycle, which is four times the Greater London average.

Don’t be fooled, dear reader. Hackney is complete crap for cycling in. In fact after an hour cycling around Hackney I started sobbing nostalgically for Waltham Forest. Yes, it’s that bad.

If Hackney is such crap for cycling in, why is modal share so high? Three reasons, I think. Firstly, Hackney is not on the London underground network and overground rail provision is very patchy. There are plenty of buses, but buses are slow. If you want to get into the City or to somewhere like Islington or the West End, cycling is a fast way of getting to your destination. Secondly, Hackney is a poor borough, with traditionally high levels of non-car ownership. A lot of people don’t have the option of driving. Thirdly, Hackney has always been something of a radical centre, and its large population of artists, radicals, and cool young professionals are more amenable as a target group when cycling is marketed as sexy and chic. Especially if they don’t have children in tow.

Modal share in Hackney is very interesting. For car travel it’s just 19 per cent, reflecting Hackney's traditionally high levels of non-car-ownership. For buses it’s 28 per cent. For rail it’s just 3 per cent. For walking it’s 35 per cent. Yet Hackney Council is profoundly hostile to pedestrians, and is just as keen to transform pavements into parking bays as crap Waltham Forest. Hackney Council is equally hostile to cycling. Its streets have been handed over to a minority of drug addicts hooked on fossil fuels, and Hackney as a whole is choked by the toxic presence of motor vehicles. The cycling infrastructure is a joke. People cycle in Hackney despite the infrastructure, not because of it.

And someone who knows Hackney much better than I do doesn’t fancy cycling:

As a bus addict I'm unlikely to ever switch to two wheels in a big way, but until London's roads feel far less hostile to cyclists I remain reluctant to even sample joining their ranks.

(Below) As you cycle along this recommended and signed cycle route in Hackney which offers a handy short cut via a cycle path across a local park (South Mill Fields) you come to a gate across the road. 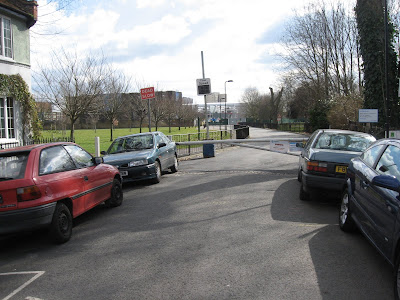 (Below) But not to worry! This gate has permeability, in the form of a gap specially for cyclists travelling in both directions! 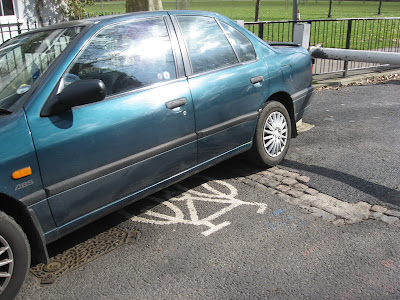 (Below) This car is parked perfectly legally. Crap Hackney council hasn't bothered to introduce a double yellow line 'no waiting at any time' waiting restriction. But then Hackney council prizes the car above all other transport modes, and don't let anyone kid you otherwise. 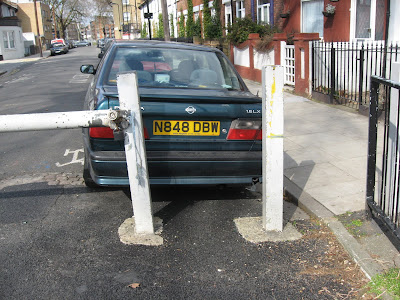 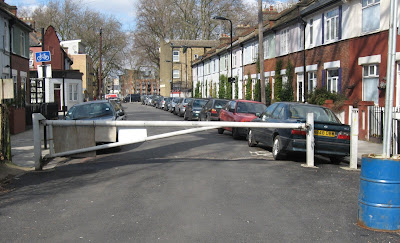 (Below) This is one of the spanking new road closures off Powerscroft Road E5. And where's the cycle lane? There isn't one. Permeability here means cycling on the pavement round the barrier. Bloody marvellous. 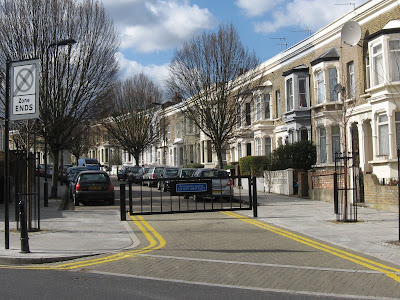 (Below) When I tried cycling east of Mare Street I quickly became lost in a labyrinth of one-way streets and hideous gyratory systems. This is Brenthouse Road E9. You can see at a glance how this street could be humanised and transformed with segregated cycle paths on the Dutch model. One-way streets and gyratories are symptomatic of councils which have lost the plot and devote their energies to on-street car parking and managing vehicle flow. Hackney is a profoundly anti-cycling local authority and by obscuring this reality the LCC is part of the problem and an organisation which is helping to suppress cycling, not expand it. 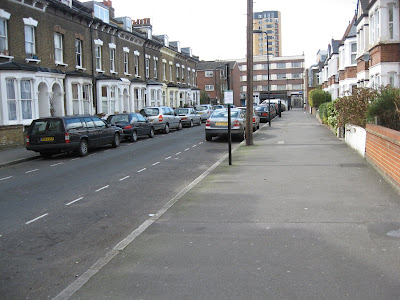 (Below) Hackney, like Waltham Forest, promotes car dependency and seizes pavements and turns them into car parks. This vehicle is parked perfectly legally, with faded markings on the footway designating the parking area. No council which was remotely Green would allow parking on a pavement this narrow, or indeed on any pavement. 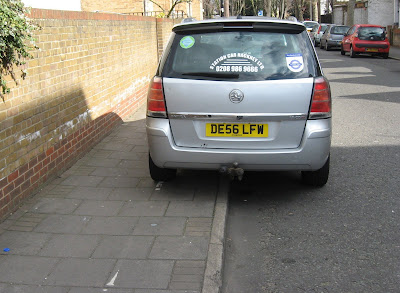 (Below) In Hackney only one driver gave me grief that day. The psycho driver of this NE London Dial-a-Ride van, reg T402 KLE. I was coming up to the end of a traffic jam when psycho couldn't resist overtaking me with half an inch to spare, then cutting in ahead of me and braking. The sort of pathological oaf who has to get past a cyclist, no matter what the circumstances. I used my native fieldcraft to get ahead of the queue and I was well on my way when a couple of minutes later a large chunk of metal manifested itself half an inch from my right handlebar. It was the Dial-a -Ride psycho again, overtaking me perilously close. This driver is plainly unfit to drive on roads which contain cyclists, and is the kind of murderous risk-taker that London's roads are full of. 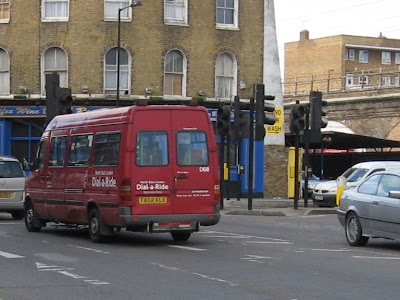 (Below) On the way back to wunnerful Waltham Forest I decided to check out this dedicated walkway/cyclepath which runs along the south bank of the River Lea from South Mill Fields to the Cow Bridge. There is, of course, no signing of this leisure route.

I discovered it had fencing across the entrance to it. No notice explaining what was going on. I squeezed through the gap and carried on to Cow Bridge, where the other entrance had been fenced off. The cycle lane was obscured by vegetation along the entire length. What is going on? What is going on is that Hackney is complete crap for walking and cycling. End of. 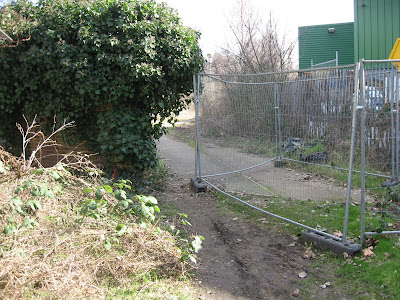 Posted by freewheeler at 09:23