“Catch up with the bicycle” 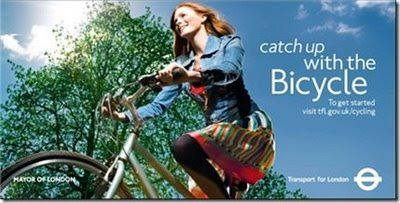 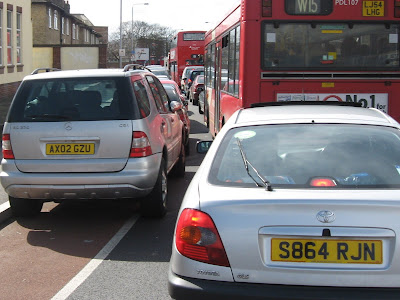 And once the marketing of cycling using sexy models has persuaded you to try out cycling, what next? A world of crap. Like here on the B159 approaching High Road Leyton, last Friday. A signed cycling route on that meaningless farce which goes by the name of the London Cycle Network. Here, the cyclist catches up with London’s ever-growing gridlock. And it’s simply not possible to get past, which is why so many cyclists take to the pavement. There’s a vision of more and more people cycling combined with an absolute refusal to provide the safe, convenient cycling infrastructure that would accommodate mass cycling. Cognitive dissonance, in other words.

What parent would want their child to cycle to school on cycling infrastructure like this? It’s no use Transport for London marvelling at the extraordinary levels of car dependency in outer London when that dependency is nurtured in every aspect of the transport network.

Here, money has been taken from the paltry cycling budget to fund road resurfacing which includes a widened cycle lane. A lane which is entirely meaningless because you are permitted to park your car in it, as all those cars on the left are. Because when there’s a conflict of interest between the lazy car driver and cycling, the lazy car driver is always put first. Which is why the vision of a significant growth of cycling in outer London is irrational and delusional. 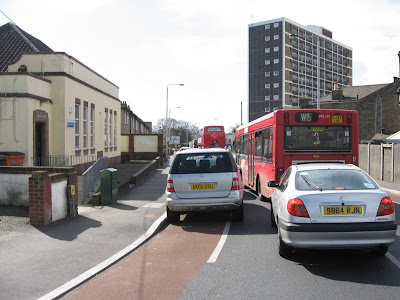 Posted by freewheeler at 08:34