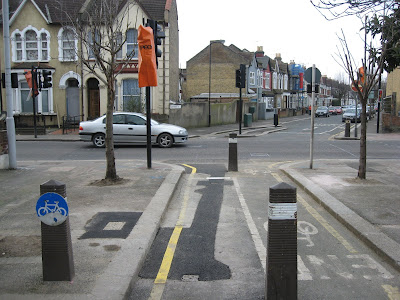 'Permeability' is one of the buzzwords in cycling campaign circles. It refers to the practice of giving cyclists attractive, direct, sometimes traffic-free routes to their destinations. This is achieved by putting cycle lanes in at road closures and allowing cyclists to reach the parts that motor vehicles can't. Good permeability puts the cyclist first and the motorist second, giving cyclists the fast, direct routes while drivers have to go the long way round. In a dense urban environment permeability makes a lot of sense and it's one of the ways in which cycling can be encouraged.

Waltham Forest includes a number of examples of permeability, including the dedicated cycle crossing shown above. This allows cyclists to cross the busy A1006 from the cul-de-sac in Maude Road E17 to Glenthorne Road opposite, leading on to the popular Coppermill Lane cycling commuter route.

However, Waltham Forest is a step ahead of even the Netherlands in its permeability. By hooding the dedicated cycle lights during roadworks, and for days, weeks or even many months after the roadworks have finished, cyclists are encouraged to develop their skills in crossing busy A roads without assistance. The dedicated cycle crossing of the A112, for example, (involving no less than five lanes of traffic) has now been hooded for seven months, which is considerably longer than the one shown here, hooded for about a month.

Hooding lights in this way is a vital step in encouraging cyclists to experience the thrill of darting across a busy A road without assistance. Once this skill has been mastered, cyclists can then safely jump red lights at major junctions, which as we know is a key element of cycling proficiency required in order to survive on London's busy streets.
Posted by freewheeler at 09:57