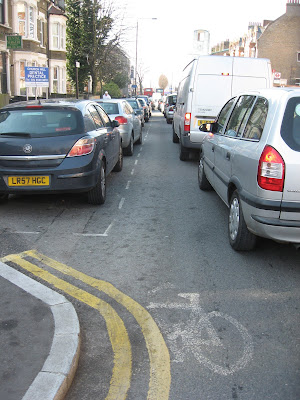 There needs to be a "radical overhaul" of road travel in the UK to avoid future gridlock, the CBI business organisation has warned.

The CBI estimates road congestion now costs the UK economy up to £8bn a year.

It warned this could more than double by 2025 unless more action is taken to tackle the problem.

The CBI is exaggerating, as lobbyists always do. Nevertheless

The issue of congestion will not go away. Civil servants see the recent drop as a temporary blip, and cite forecasts that average delay due to congestion will rise by around 35 per cent by 2025, stifling economic growth and job prospects. The problem needs to be tackled. Until recently, it was clear that ministers felt that road pricing was the most effective way of doing it - hence their insistence that all bidders to the Tif would have to introduce a charge. The promotion of walking, cycling or car-sharing may have their place in cutting congestion, but you can't see them having the same impact as the London congestion charge, which has reduced traffic levels in the centre of the city by 20 per cent since its introduction.

In reality, building good, safe, convenient infrastructure for cyclists could tackle congestion by, in the first instance, removing from the roads all those who use their cars for journeys of less than 5 miles. But building the kind of infrastructure which radically transforms modal share is a very different matter to the popular British flaccid alternative of "promoting cycling" in a vehicular cycling environment.

The biggest obstacle to a civilised transport culture in Britain is the Department for Transport, a poisonously car-supremacist institution which has long had cosy links with the road lobby, and which has always loathed walking, cycling and public transport. It has benefited from governments which have always lacked the will to cut out this cancer at the heart of car-sick Britain, or the courage to stand up to the road lobby and its media lynch mob representatives.

But, hey, the CBI obviously hasn’t heard the good news about London, which is rippling across Europe!

Yes, with a 400 per cent increase in cycling in London by 2025, congestion will be a thing of the past in the capital as zillions of laughing, smiling Londoners pour in dense crowds down gleaming cycle superhighways to the cycling paradise that is Oxford Street.
Posted by freewheeler at 09:09