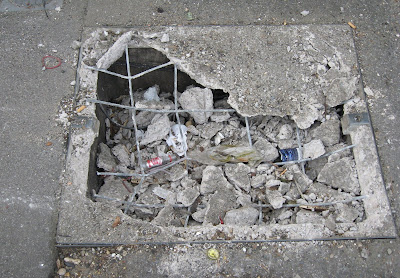 He has previously attracted the attention of this blog in connection with The Leyton Polyclinic.

Cllr Akram is leading the council's crackdown on the right of local groups to set up stalls in the Town Square for their various campaigns. More on this topic another day. I just wanted to note that one of Cllr Akram's excuses is public safety, which might be endangered by someone sitting behind a table. So I thought it was time to display the current condition of the pavement on Byron Road E17, a sure sign of a council which is passionate about the safety of the general public.

Cllr Akram's cynical discovery of public safety issues in connection with having a campaigning stall in the Town Square is really aimed at The Socialist Party. But it affects a wide range of other groups. This one, for example,who had a letter of complaint in The Waltham Forest Guardian last week.

Posted by freewheeler at 09:46