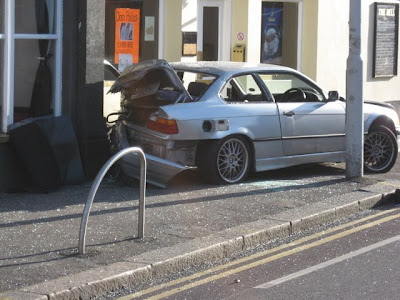 A year ago I asked:

Was drink involved? Across the road from the crash site is this advertising panel promoting the pleasures of a pint of Young's.

It turns out that the driver was drunk.

An inquest at Walthamstow Coroner's Court today heard how Mr Moisa, 29, had used his brother's car, despite having no insurance, following a heavy binge drinking session.

He was also on a driving ban following a drink-drive conviction when the fatal accident happened at around 4.30am.

Giving evidence, witness, Kile Forbes, a student at Waltham Forest College, told the court he was walking home in the direction of Walthamstow Magistrates Court when he saw the BMW approaching at high speed. He recalled the car driving closely to the pavement before hitting the curb a metre from where he was walking.

The Metropolitan Police Service is complicit in this act of violence and bears a heavy responsibility for allowing the roads of London to be a haven for the uninsured driver, the disqualified driver, the drunk driver, the speeding driver, and the driver chatting on a mobile phone. Law and order has collapsed on London’s roads and criminal drivers know it. And it’s rooted in the continuing decline in the number of traffic police.
Posted by freewheeler at 08:37