Cycling is getting worse, not better 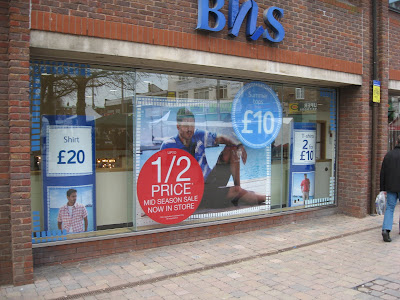 The last cycle stand outside the Bhs store in the Town Square, Walthamstow, has now vanished. There used to be a row of five cycle stands by this window , and if you look at the ground you can still see the marks where they were rooted. One by one they have been removed, and now the last one has gone. I have no idea why this stand has gone, as it wasn't loose, like some of the unmaintained stands in the borough.

I used this stand when I went to buy a paper or a magazine from the nearby newsagents. Now I'll end up buying them from somewhere else. The newsagent has lost a customer but he won't understand why. Shopkeepers are usually the last people to grasp that cyclists spend money as well as motorists.

In all, EIGHT CYCLE STANDS HAVE NOW VANISHED FROM THE TOWN SQUARE (there was also a row of three stands near the Nat West bank, which have also gone). Even at the most rudimentary level, cycling is going backwards in the London Borough of Waltham Forest. Meanwhile, the car-centric Council presses on with its programme of creating new parking bays on pavements and alongside cycle lanes.
Posted by freewheeler at 09:28