£250,000 to be wasted on cycling infrastructure that won’t work 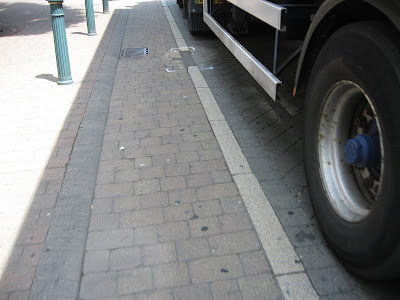 In the London Borough of Waltham Forest

A total of £250,000 from the Olympic Delivery Authority will be spent creating new cycle lanes and improving existing ones in an attempt to get more people out of their cars and on to their bikes.

But ‘cycle lanes’ are not the answer. The borough has a large network of cycle lanes which have signally failed to encourage local people to take up cycling.

Almost all local journeys are made by a transport mode other than cycling (i.e. by walking, by driving, or by bus, tube or rail). Cycling has not grown in any significant way in Waltham Forest and modal share is stuck at one per cent. Cycling is flatlining, not expanding in any significant way. It’s worth remembering that a decade ago the target for cycling in Waltham Forest was modal share of 10 per cent by 2012.

This continuing failure can be attributed to the poor conditions for cycling on local roads, something underlined by the Waltham Forest Cycling Campaign’s poll of local cyclists, which showed a clear preference for off-road cycling.

Vehicular cycling has failed in Waltham Forest, but it seems this money will be frittered away on schemes which are doomed before they are even started. An on-road cycle lane on Whipps Cross Road will attract no one except the tiny minority of existing cyclists who are prepared to put up with road danger, inconvenience and high volumes of motor traffic.

There’s also something very dodgy about this story. Several of the schemes mentioned have already been paid for out of other budgets and are in no sense new schemes. So by the sound of it there is some creative accounting going on, and money will be diverted from cycling to the council’s number one priority, on-street car parking and smoothing motor vehicle flow.

A total of 33 new bike stands across the borough

Are they going to be gold-plated and encrusted with jewels?

Councillor Clyde Loakes, who I see these days describes himself as a 'bike enthusiast' (which may well be something different from ‘a cyclist’) says:

"We aim to raise people's confidence on bicycles and provide the infrastructure they need to get around quickly and safely.”

But that is precisely what the London Borough of Waltham Forest fails to do, as illustrated on this blog on a daily basis.

(Below) Two left turning vehicles, one in the Advanced Stop Line for cyclists, at Harrow Green. 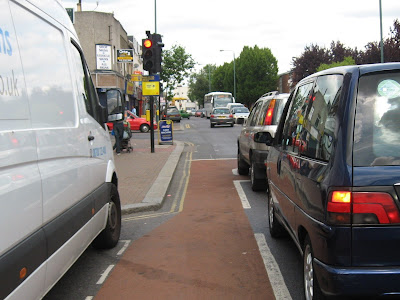 Posted by freewheeler at 14:05