Cycling, car parking, the Outer London Commission, and Waltham Forest: nothing but the same old story 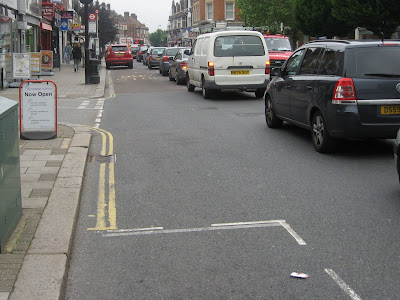 Car-sick Chingford. Car parking bays, no cycle stands, no cyclists, and traffic backed-up along Station Road. Cycling is going nowhere in town centres like these.

The Bike Show provides a very valuable service in supplying a transcript of the monthly Mayor’s questions and answers session. If you are looking for the reality under the spin it’s here you’ll often find it.

One question alerted me to the existence of a quango called the Outer London Commission, which I had never previously been aware of. Apparently it works tirelessly to promote the interests of those of us blessed to live in outer London boroughs like Waltham Forest.

I turned to the transport section of the Commission’s latest report. Cycling and walking are lumped together even though they are quite distinct transport modes. The Commission states

There are of course additional health benefits of promoting active modes like cycling and walking, and these must be promoted as modes of choice. They are also cheap and have minimal negative environmental impacts. There is a role for local authorities to take a lead in outer London, developing cycle hubs in and promoting local cycling.

This is the sort of bland, vacuous gush which has been spewing from councils, governments and politicians for years. The operative word in that paragraph is ‘cheap’. Yes, a pot of white paint and some lovely blue metal signs are all you need to create a crap off-road cycle path.

In the same breath the Commission reveals where its real interests lie.

Adopting a flexible approach to car parking in outer London is required so that a level of accessibility is maintained whilst being consistent with the overall balance of the transport system at the local level. We have heard that developers often view the lack of onsite car parking for offices in outer London as a disincentive to develop offices here, and this is not desirable from an economic point of view. We also know that parking policies in outer London can often put them at a disadvantage compared to centres outside London. In town centres where regeneration is needed, there may be justification for some liberalisation.

In other words, more car parking and more car dependency.

The notion that you can get more people cycling in outer London, where modal share is less than one per cent, while simultaneously encouraging people to drive to work, is a flagrant contradiction. But it’s no different to the policies of the London Borough of Waltham Forest under its deluded leader Councillor Chris Robbins, who thinks that the local area can be improved by creating as much on-street car parking as possible and by encouraging people to drive to their local shops.

The consequences of such policies are inhumane, car-choked streets with a high incidence of crime, depression, anti-social behaviour and alienated and atomised neighbourhoods with no sense of community. Such ‘improvements’ are made at the expense of pedestrians and cyclists, whose environments continue to deteriorate.
Posted by freewheeler at 09:14