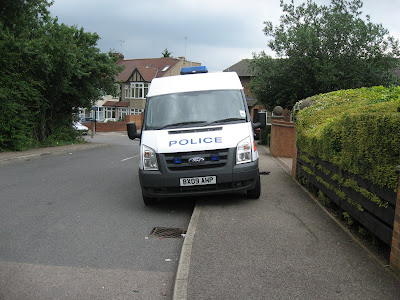 Britain is a society fixated on violence, yet the biggest and most regular form of violence in Britain attracts little media attention and no political discussion; it is not on anyone’s agenda. Ironically, the police are among the biggest perpetrators of this violence. Police drivers kill. Repeatedly.

Three pedestrians have been killed by police drivers in the past seven days. Last night an elderly man died after being struck by a marked police car in Coventry and last Friday two pedestrians on a pavement at the entrance to a 20 mph zone were killed when they were hit by a police car responding to an incident in Bedfordshire.

A year ago an elderly pedestrian was run down and killed by a police driver in Chingford, the driver being almost instantly exonerated by the discredited Independent Police Complaints Commission, which regarded the speed as reasonable but won’t tell us what it was.

In March a police driver travelling at high speed slammed into a cyclist at a crossing in Hackney:

The police car was travelling so fast it continued along the road for at least 100 metres after hitting the cyclist at the junction of Southgate Road and Northchurch Road.

The cyclist remains in a coma

The MacLeods' lawyer said the family, of Stoke Newington, were “disappointed” about the way the police had handled the inquiry.

The violence of the police doesn’t seem entirely unrelated to the atrocious standards of police drivers generally (photo above of police van reg. BX09 AHP taken on Bailey Close E4 yesterday), the car supremacist prejudice at the core of British policing (which has never regarded traffic violence as ‘real’ crime), the car dependency of those who manage policing (the Commissioner of the Metropolitan Police and his Commanders all enjoy a comfortable chauffeur-driven lifestyle which insulates them from the dangers their indifferent traffic policing imposes on London’s cyclists and pedestrians) and the active hostility to cyclists among many ordinary plods; this, for example.

These latest killings occur against the background of a policing culture which is itself lawless and corrupt:

Hundreds of Met Police officers have been convicted of crimes ranging from sex attacks and assaults to traffic offences in the past eight years. Figures released under the Freedom of Information Act show 639 officers have been found guilty of criminal offences since 2002. A total of 79 were jailed, 73 of whom were dismissed or required to resign

Most of the officers kept their jobs after their convictions - the majority of cases involved minor traffic offences.

See also this and this.
Posted by freewheeler at 10:18