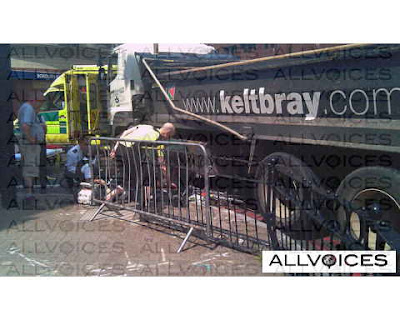 There’s a detailed report here. The absence of fixed railings at the site does appear to have prevented a possible fatality.

The report doesn’t answer the fundamental question in collisions of this sort, which is where the cyclist was in the time just before the impact. If she was waiting at the junction and the lorry driver pulled up alongside her, then he was grossly negligent in moving forwards and turning at the same time as her. If the lorry was waiting at the junction and the cyclist undertook, then she is at fault. The solution to collisions of this sort is, of course, to separate cyclists from motor traffic rather than expect them to share space.
Posted by freewheeler at 11:47