Bike Week: the dream versus the reality 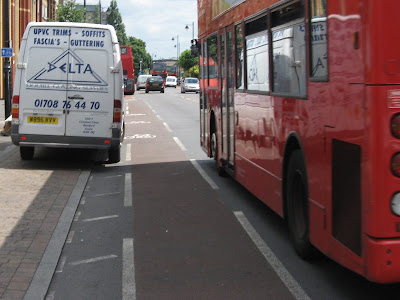 Its aim is to get half a million people on bikes. It will do this using its arsenal of free breakfasts, organised bike rides, free bike repair sessions and plenty of patting people on the back for being a cyclist.

The problem is that none of this advances the cause of cycling an inch, in so far as what cycling requires is safe, convenient infrastructure.

Just as I believe that by embracing vehicular cycling the London Cycling Campaign and the Cyclists’ Touring Club are major obstacles to the development of mass cycling, so do I believe that Bike Week represents all that is bad about cycle campaigning in Britain. It’s about PR, not substance. It’s all feelgood froth. It does nothing for cycling.

Because when Bike Week is over, those new to cycling will find themselves trying to cycle in conditions like the ones shown here, both taken within a couple of minutes of each other yesterday. The first one (above) shows the cycle lane on Lea Bridge Road in Leyton (A104), which, incredibly, gets the thumbs up from Waltham Forest Cycling Campaign as exemplary infrastructure. And with campaigning like this, is it any wonder that cycling in Waltham Forest has a modal share of one per cent? The photo below shows Markhouse Road E17 (A1006). The cycle lane invites undertaking, which is unwise when there’s a lorry and a junction coming up. 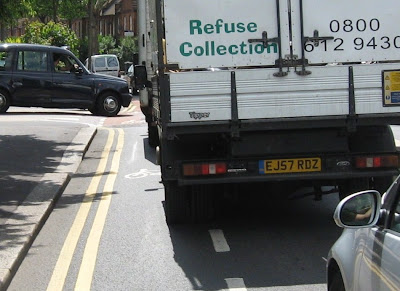 Meanwhile the Cycling Lawyer has got himself a Helmetcam and treats us to his first bike ride while using it. Fifty-one seconds of hazardous cycling.