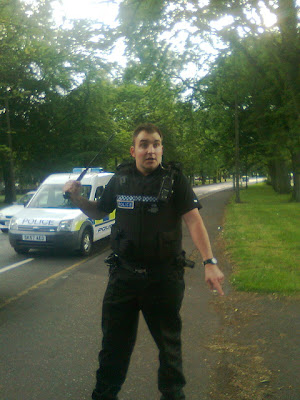 First, some context. Scotland is a country where a motorist who ran down and killed a child cyclist was treated with every sympathy and allowed to drive away from the scene. And where the police who arrived on the scene where a cycling champion was run down by a van driver made no attempt to see if the driver had been using a mobile phone at the time of the collision. That’s how prejudiced and rotten Scottish traffic policing is.

In Edinburgh the police are aggressively hostile to mass cycling. Nudity is not permitted on the Naked Bike Ride on the grounds that the public must be protected from This Kind Of Thing:

While mass naked bike rides are set to be held across the world on Saturday, in Edinburgh the participants have been told they must preserve their modesty.

It comes after run-ins in previous years with Lothian and Borders Police, including in 2004 when officers threatened to arrest anyone who stripped off for "outraging public decency".

A police car swung in front of the cyclists on the wrong side of the road, forced the mass to stop and picked out the sound system rider for no apparent reason. As no offence was being committed, the riders found it hard to see why their details should be given over. After some arguing, and an increasingly frustrated cop who realised that he had no grounds for demanding the riders details, backup quickly arrived, with three more cop cars and three vans.

The arrested rider was eventually released later last night with four charges - cycling without due care and attention, obstruction of the highway with a bicycle and trailer, failure to provide details when required and resisting arrest.

But though the Scottish police are aggressively car supremacist in their anti-cycling policing, it’s all a matter of degree. London’s police are not really any better:

It seems a little unfair that community support officers are able to hand out fixed penalty notices to cyclists but not to drivers.

But that’s not a coincidence. This kind of discrimination is structured. Take a look at the community feedback questionnaires which the PCSOs go round giving people. There’s a helpful list of problems for you to tick, with ‘Antisocial behaviour by youths’ at the top and ‘Cycling on the pavement’ not far behind. Excluded from the list are any crimes or anti-social behaviour by motorists. There is no box for ‘speeding drivers’ or ‘drivers parking on the pavement’ or ‘people driving while using mobile phones’.

While resources are being increased for punishing hundreds of cyclists who have committed victimless crimes, the Met continues to reduce its road traffic policing, with fewer and fewer speeding drivers and red-light-jumping motorists punished. This is a policing policy written in the blood of pedestrians and cyclists, who are most vulnerable to violent, reckless and aggressive road users:

Calculated per police force, the highest number of [road] deaths last year was in the Metropolitan Police area, with 182 people killed.

The most lawless and violent members of British society (i.e. drivers) know they have little to fear from the British police, who have never regarded driver crime as ‘real’ crime. Most driver crime goes undetected and unpunished. Road traffic policing has never been regarded as a very important part of policing (unlike, say, ‘vehicle crime’ – Britain’s senior police officers are obsessed by theft of or from vehicles, which as we know from the black cab rapist case is treated by some police commanders as a higher priority than rape).

While senior police officers have traditionally resisted the use of camera technology to catch motoring crime, they show no such restraint when it comes to spying on ordinary members of the public who have committed no crimes but who dare to participate in peaceful protest.

The quintessential uselessness and authoritarian instincts of British policing are revealed yet again by this case, in which

In July 2005, they were stopped by police under the Terrorism Act after driving into the east London to help a family member move house. They later discovered police had placed a marker against their car registration on the database, triggering an alert – "of interest to public order unit, Sussex police" – each time they drove beneath an automatic number plate reading camera.

In recent days I’ve seen PCSOs wandering around Walthamstow putting up these notices (below), which are not only a complete waste of money and a statement of the bleedin’ obvious, but also a symptom of policing which is obsessed with the relatively trivial problem of 'car crime' while indifferent to motoring crime.

The police are no friends of cycling. 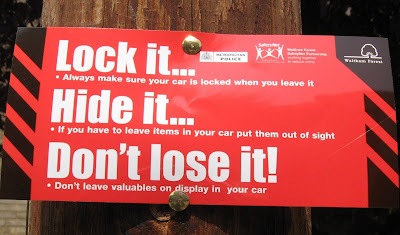 Posted by freewheeler at 13:55