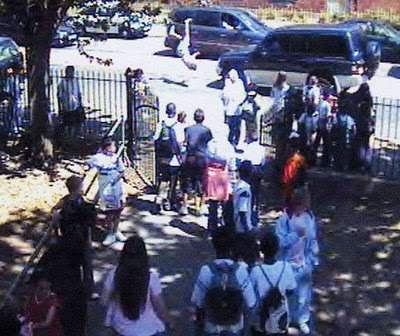 Caught on CCTV. The moment a hit and run 4X4 driver collided with a child outside her primary school.

‘Road safety’ is a fraudulent, blood-drenched ideology which was invented by the road lobby and is dedicated to evading the true causes of road carnage (driver recklessness, massive contempt for road traffic law by those operating dangerous machinery, and cars expressly designed to break the speed limit twice over).

'Road safety' is an ideology designed to minimise the role played by drivers and dangerous machinery in road carnage, instead preferring to put the blame on the victims (the cyclist was not wearing a helmet or high visibility clothing, the pedestrian on the zebra crossing was wearing a dark coat). 'Road safety' has no interest in cars designed to go no faster than the maximum national speed limit and has no interest in speed limiters, speed cameras or increased enforcement of road traffic law. Instead 'road safety' prefers to blame 'dangerous roads' and divert attention to irrelevant technical issues (if speeding drivers ‘lose control’ and crash into trees and kill themselves, we must cut down the trees). The 'dangerous roads'/technical fix solution is all about protecting motorists personally from the consequences of their reckless risk-taking behaviour. The only interest that 'road safety' has in pedestrians and cyclists is in commanding them to adjust their behaviour to the blood-soaked car-centric status quo.

Today’s British media is saturated with this road propaganda masquerading as objective analysis:

A section of the A40 between Carmarthen and Llandovery is the most improved in terms of safety in the UK, according to a charity.

That’s how today's BBC News uncritically recycles a press release, without bothering to inform viewers or listeners who this so-called ‘charity’ represents.

There were 27 fatal or serious incidents on the stretch in the three years leading up to 2005. But these fell to seven in the three subsequent years.

The Road Safety Foundation said the figures were due to resurfacing work, improved drainage and safer junctions.

It said inexpensive engineering measures could save many lives.

In fact the Road Safety Foundation is nothing more than the big bad wolf wearing a bonnet, i.e. the AA - an organisation which was first established to help drivers evade speed checks and whose influence on government is written in the blood of the tens of thousands of cyclists and pedestrians who have died thanks to its toxic influence on shaping government policy.

The European road lobby operates under a plethora of bogus ‘road safety’ organisations which have no members whatsoever and are nothing more than well-funded propaganda outlets, devoted to sending out press releases which are regurgitated without critical comment by journalists across the media. These press releases are all devoted to calling for more money to be spent on roads. According to Google, this new press release has been used by 85 news outlets in the UK today, ranging from BBC National News to local newspapers.

This new ‘report’ consists of nothing more than putting a spin on road casualty figures and blaming road carnage on fictitious road design faults rather than reckless drivers. It's a press release not remotely interested in cyclists or pedestrians, who are road user groups of no interest to either the road lobby or the BBC. It’s ultimately all about making roads safer for the likes of Anthony Andrew.

And if you want a good critique of ‘road safety’ in Britain, you can’t do better than this.
Posted by freewheeler at 09:53