What Katy Carr did next 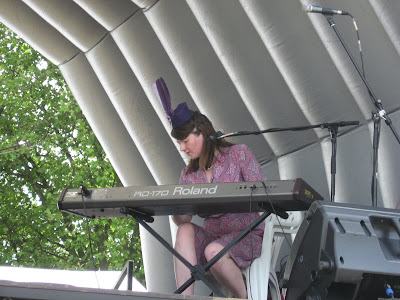 As the seventh child of a seventh child I possess the rare gift of being able to see into the future. So there was never any doubt where I’d be at 3 pm yesterday. On the grass in Lloyd Park, watching Katy Carr and the Aviators.

I must confess I’d never heard of Ms Carr until a couple of days ago when I came across an enticing YouTube clip on the Archipelago of Truth.

Katy is a bit weird and dresses in 1941 chic. Her very professional website will tell you everything you need to know. Artistically she’s on the weird woman spectrum (think PJ Harvey, Bjork, Tori Amos, Kate Bush) which is very much my cup of tea. But apart from doing cabaret-type songs and strange, stirring ballads she also does retro classics on an electric ukulele. Yesterday in Lloyd Park she did the lot. The first set at 3 pm with The Aviators was Katy with vocal support and a full-blooded backing, doing her hits. Terrific stuff and I have since ordered her first and third albums on the interweb (if they live up to my fervent expectations I shall be splashing out on the other one). 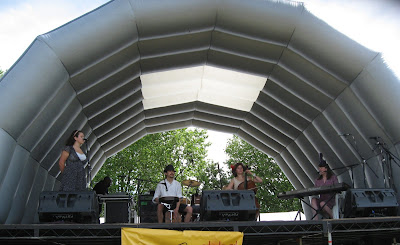 Sadly as the band went into their electrifying last song ‘Berliner Ring’ the power to the stage failed and the inflatable awning, evidently kept up by a generator, began to collapse. Like the rest of us, Katy suddenly discovered that life in Waltham Forest is a deeply deflating experience. Like a musician on the Titanic, Katy tried to keep the show going and bravely switched to her ukulele, attempting a new song as the plastic sagged ever closer, moving to embrace her like a monstrous flesh-eating plant. 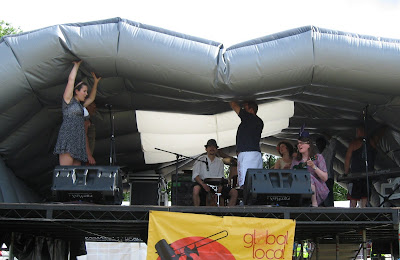 What Katy did next. She came back at 5.15 pm and did a solo set with her ukulele, including Lili Marlene, a George Formby classic, a song in Polish (tell us what it’s about next time, Katy) and We’re Going To Hang Out Our Washing on the Siegfried Line. By this time I think the heat was getting to her. It’s also probably a bit dispiriting to be an amazing artist who should be performing before an adoring crowd of thousands at Glastonbury or the Cambridge Folk Festival and instead you find yourself in a park in Walthamstow on the hottest day of the year, with an England match on, and an audience made up of a couple of mothers with small children, a cyclist and a giant grasshopper. 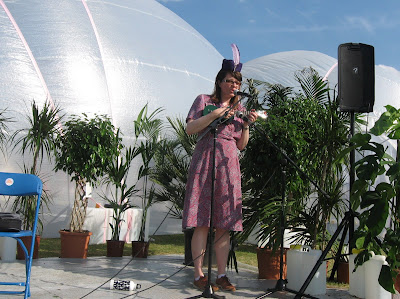 Here’s ‘Berliner Ring’, which is a very fine song and a cool video, though only a pale shadow of how Katy sings it live.

Posted by freewheeler at 10:58