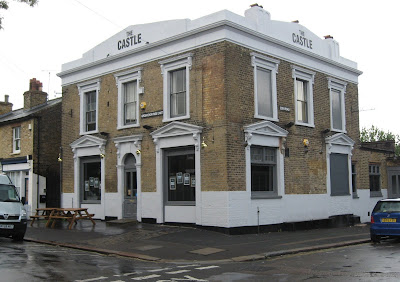 Exciting new evidence that Franz Kafka once lived in East London has been uncovered in the archives of the Vestry House Museum, Walthamstow. This short handwritten story runs as follows:

One morning Joseph K woke up to find a leaflet through the door advertising a newly refurbished local gastro pub, ‘The Castle’.

This sounds like my kind of place, thought K, as he read the menu and gazed at the photograph of the establishment’s attractive grey décor.

But when he rode there on his bicycle he discovered that no one had thought to install any cycle stands. And there were no cycle stands on any of the surrounding streets.

So instead of spending his money at The Castle, Joseph K went home and had beans on toast instead.

How absurd and futile life is, he thought.
Posted by freewheeler at 14:13