The LCC, the CTC and the ‘safety in numbers’ myth 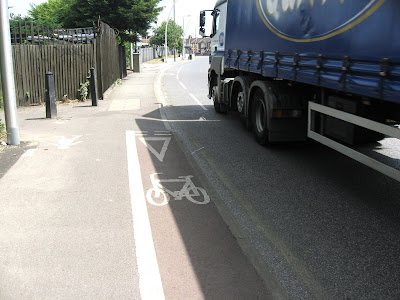 ‘Vehicular cycling’ is a catastrophe for safe cycling and for mass cycling but this is what the two main cycling organisations in Britain remain doggedly committed to, run as they are by fundamentalists.

The Cyclists’ Touring Club and the London Cycling Campaign are failed organisations, in denial about their failure to bring about mass cycling over the past thirty years. The basic reality is that cycling in this country is unsafe (and widely perceived to be unsafe by the majority of the population who won’t and don’t cycle). Not surprisingly, cycling has not expanded.

Vehicular cycling (i.e. cycling on roads shared with motor vehicles) remains an activity engaged in by a tiny minority, which is not growing. The level of cycling in the UK was under 2% of journeys in 1996 (just the same as now). Like medieval alchemists, the LCC and the CTC dream that one day the dross will be magically transformed into gold and they eagerly collaborate with the state (which rewards them with funding) in promoting the delusion that things are getting better and a glorious future is just around the corner.

The CTC rushed to explain that this was actually good news not bad:

Chris Peck, CTC policy officer, said: "While this rise in cycle casualties may seem a bad thing, there is no greater risk than previously, because levels of cycling have also gone up.

The LCC dutifully chimed in:

A London Cycling Campaign spokesman said, “Changes in casualties definitely need to be related to cycling volumes. Cycling organisations have long argued that we need to be looking at casualty rates (taking into account mileage) rather than simply collision numbers.

“Data from the Netherlands and elsewhere, cited by CTC, suggests that there is a ‘safety in numbers’ effect with cycling and that as cycling grows the collision rates fall – the Netherlands and Denmark, where cycling levels are high, have much lower casualty rates than the UK.”

There are various objections to this. Firstly, the CTC and LCC don’t seem to possess a rudimentary understanding of the meaning and analysis of statistics. Compared with driving, cycling now has a risk 12.7 times as large per km travelled, when it was just 9.3 times as risky in 1981. Secondly, exposure to risk and road danger for cyclists cannot meaningfully be deduced simply from road casualty figures. Thirdly, the reason why the Netherlands and Denmark have much higher cycling rates than Britain, and much safer cycling, is because of the infrastructure. And even within those two countries, cycling rates and safety are very variable, and entirely determined by infrastructure.

There is no point in citing the Netherlands and Denmark as examples of safe cycling unless you are prepared to demand the kind of infrastructure which cyclists in those two countries enjoy. This is precisely what the CTC and the LCC are not prepared to do. Neither organisation displays much interest in the extraordinary success of places like Groningen and Assen. Instead both organisations remain fundamentally committed to the small-scale amelioration of the conditions of vehicular cycling. This is a campaigning strategy doomed to failure and one which will continue to suppress mass cycling.

Finally, let me prove my point with some photographs. I have no idea what the casualty figures for cycling are on this road are (a major route for commuter cycling) but I regard it as unsafe, dangerous and unpleasant. You might be able to 'prove' this route was safe by showing that there had been no fatalities, serious injuries or slight injuries at all, but you won't get people using routes like this by quoting statistics at them. The conditions are unalterable here, no matter how few or how many cyclists pass along this route each day. And mass cycling is never going to happen in London as long as cyclists are supposed to use infrastructure like this.

The first photo above shows part of

Orient Way along the Lea Valley. This has very wide and smooth segregated cycletracks and it won the LCC Best Cycle Route Award in 2001.

My photo shows where the cycle path on this prize-winning route ends and joins the start of the on-road cycle lane on the A106, heading north into Leyton. The A106 is a signed route on the London Cycle Network, with lots of lovely blue signs to remind cyclists they are on a top quality cycle route.

Drivers are given no warning that cyclists will be entering the road at this point, and cyclists are given no physical protection from oncoming traffic on this major route out of inner London. I was interested to see that the single yellow line no waiting restriction alongside the cycle lane has now been erased. Another small sign of how Waltham Forest is regressing as a place for cycling. Photographs taken on Bike Week day six. Having put my camera away and pedalled on, I caught up with the HGV shown in the first pic.

You think modal share in Waltham Forest is ever going to rise above one per cent with cycling infrastructure like this? In your dreams. 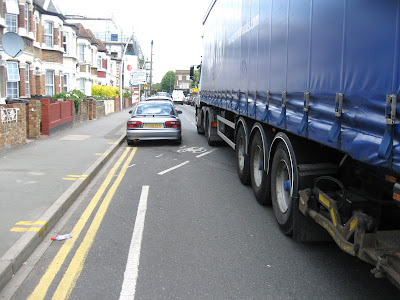 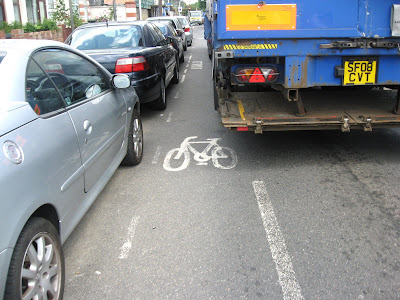 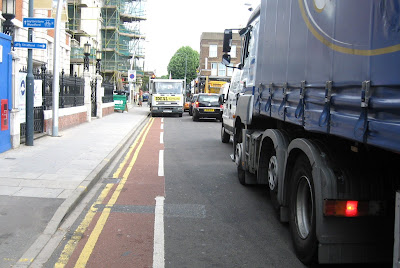 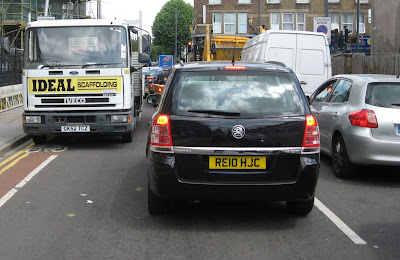 Posted by freewheeler at 10:21