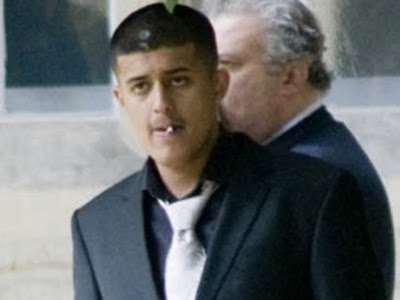 A DRIVER convicted of running down a father at almost double the speed limit made gun gestures at his victim's family after the jury's verdict.

Mudassar Khan was 17 when he killed pedestrian Javid Ashgar, 48, in Ilford in February last year. Moments after being convicted at Snaresbrook crown court of causing death by careless driving he made shooting actions at Mr Ashgar's friends and relations with his right hand.

"He was speeding. Javid Ashgar was crossing over Green Lane on foot when the defendant's car hit him causing him such serious injuries that he died at the scene. The speed limit here is 30mph and Khan was travelling between 44 and 54mph."

Whatever other punishment this yob will receive (sentencing has been deferred), you can be quite certain he will be reunited with his driving licence within a year or so.
Posted by freewheeler at 10:50