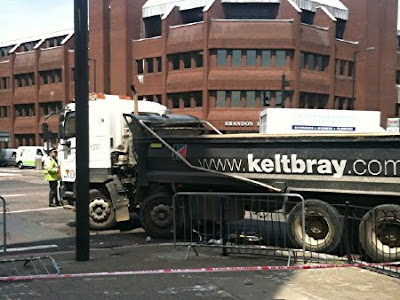 Borough High Street was closed to traffic today when a Keltbray tipper truck was involved in a collision with a cyclist at the junction with Great Dover Street.

It was Keltbray lorry driver who killed a cyclist nearby in March.

This latest collision appears to have all the hallmarks of the classic left-turning lorry/cyclist collision, though it appears the consequences were, mercifully, relatively minor. It may or may not be relevant that the railings at the site of the collision were temporary, with one knocked flat, and intrinsically less lethal than the standard deathtrap fixed railings to be found at many London road junctions (which no one seems in any hurry to remove; locally there are numerous such junctions in Waltham Forest).

This latest incident shows that in spite of all the numerous 'road safety' initiatives aimed at addressing this aspect of cycling in London the problem of left-turning lorry/cyclist collisions is continuing. 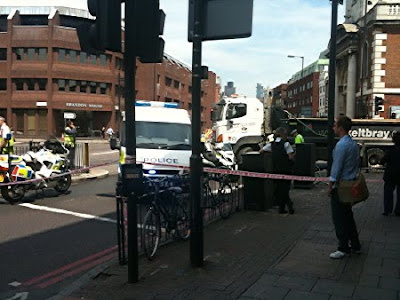 Posted by freewheeler at 17:01